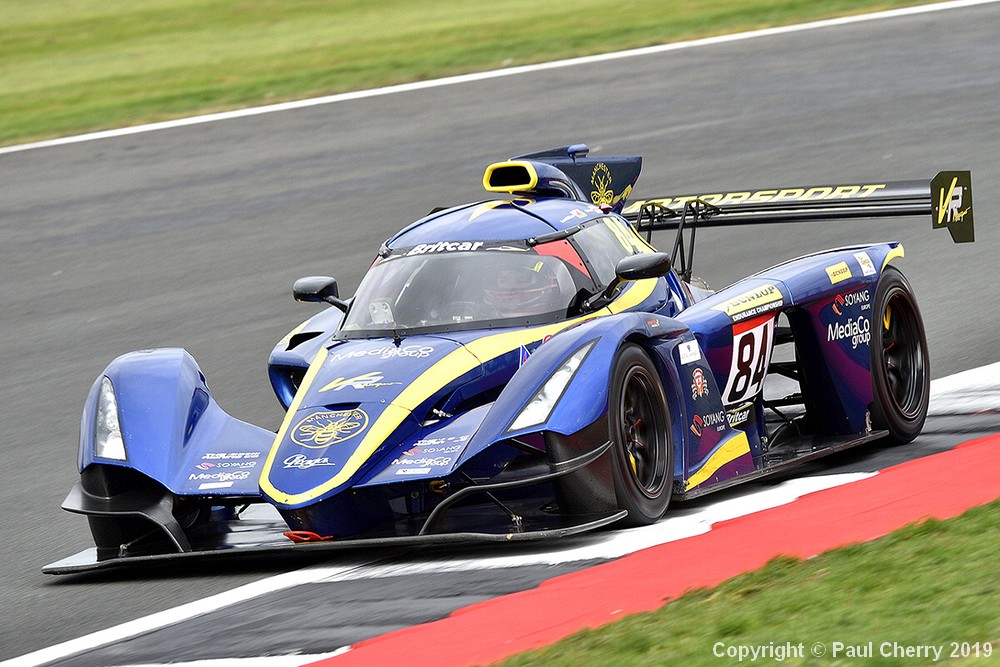 Despite squandering pole position with a pace-lap spin, the VR Motorsport Praga R1T, driven by Al Boulton and Tim Gray, cut through from the back of the pack to post another convincing victory in the first of two one-hour races.

"I was on new, unscrubbed front tyres, and only going at walking pace" was Al Boulton’s explanation of his pace-lap spin that dropped the Praga to the back of the field as the pack snarled towards the start-line lighting gantry, and he joined fellow Class 1 protagonist Ben Sharich in the MacG Racing Taranis, which had missed qualifying after failing noise testing, causing the team to fabricate a belt and braces exhaust system that resemble a bicycle rack.

Storm Hannah had taken a grip, with extreme winds across the former airfield circuit, and it was left to Ross Wylie to lead once the lights went out, a familiar situation, but the Scot is now in a Class 2 Ferrari 488, so streaking away as he was wont to do last year is not now so easy, and he had a trio Sakers in his wake, significantly classmate David Brise in the ALP Racing machine, who was followed by the Class 1 JPR Motorsport versions of Paul Rose and Chris Hart.

It wasn’t long before Rose was pitbound though, an electrical glitch was detected, and whilst the black car returned to the track, it was retired 11 laps in, by which time the race had already lost George Agyeton’s BMW M3, Barry McMahon’s Alfa Romeo 156, and the Track Focused Ferrari 488 of Stuart Willson, another victim of the noise police, the modifications made to the exhaust system suspected of throwing heat back into the engine bay.

Meanwhile Wylie was only eking out a margin at the front rather than striding away, and the Praga had taken just seven laps to get in touch with the fast guys, tailing Wayne Marrs’ 488 before taking sixth place off him, and chasing down Paul Bailey’s similar machine, while Mark Cunningham was upholding Class 3 honours, eight overall in the SG Racing Porsche 997.

There was more Saker trouble, Chris Hart crawling into the pits from third place after just 20 minutes, the green #4 car having gone into limp mode. The JPR team fixed the problem, and Steve Harris rejoined, managing to finish just a lap down on the winners at the end of the race. Paul Bailey was the first to take a mandatory stop, handing the SB Racing 488 to Andy Schultz, and this prompted a raft of stops, with the faster drivers of a combination leaving it a little later within the 12-minute "window", Sarah Moore, Mark Cunningham, Martin Byford, David Brise, Martin Compton, and on the very cusp, Ross Wylie from the lead, all making the most of a longer stint.
Sam Neary had taken the Team Abba BMW GTR well into the Class 4 lead, but it wasn’t long after the driver changes that dad Richard was into the gravel at Luffield – it was dealt with under waved yellows, and took a while, with Neary staying in the car until it was pulled free and released back to the pits for investigation and gravel clearance.

After the stops, David Mason, who had taken the FF Corse Ferrari 488 over from Wylie, still had a healthy 21-second lead over Alan Purbrick, who maintained second place after relieving Brise in the ALP Racing Saker, bot looming in on both of them was the Praga, with Tim Gray now at the wheel. The Saker was taken in short order, then two laps later, Mason’s Ferrari, the gap coming down by 14 seconds in one lap, and even a subsequent drive-through penalty for the Praga didn’t alter the lead status, such was the advantage that had been built in a few laps. The Saker, though, having taken Mason’s Ferrari for second place, was nursing a gearbox issue, and was losing ground to first Andy Schultz, then Charlie Hollings, who had taken the Fresh’n’Fruity Ferrari 488 over from Wayne Marrs, who both passed to assume the final podium places.
But nobody could touch the VR Motorsport Praga, and Gray crossed the line after 27 laps, from stone-last at the start, over three-quarters of a minute ahead of Schulz, who was just 2.6 seconds in front of Hollings.

The Praga took the Class 1 honours too, with the MacG Racing Taranis second; Ben Sharich had shadowed Al Boulton as they cut their way through from the back, but was stuck midfield, rising to sixth overall after Jonny MacGregor took over and got through the hard-charging class battles, whilst JPR salvaged a mare of a race, claiming the final class podium spot with the #3 Saker of Steve Harris and Chris Hart.

The Bailey/Schultz and Marrs/Hollings Ferrari 488s claimed the top two Class 2 places, with the ailing Saker of Purbrick and Brise third, ahead of the Mason/Wylie 488, whilst fifth were series debutants Ben Dimmack and Steve Burgess, the keen Radical exponents having performed well in the RAW Motorsport Ginetta G55.

Class 3 ebbed and flowed between the SG and Valluga Porsches; Mark Cunningham showed the way for SG Racing in his opening stint, pitting late from a front-running overall position to hand over to dad Peter, by which time Adam Hatfield was already in full swing in the Valluga car, having taken over earlier after Ian Humphries solid opening stint. The class win fell to Valluga, just under three seconds ahead of SG Racing at the flag – these two teams are equally matched.

Class 4 could have/should have/would have gone to Team Abba but for that incident, but it was the understated stealth of Sam Alpass, in the Geoff Steel-run BMW M3 the win, though there was nothing understated about what went on behind, as Tim Docker in the Maximum Motorsport VW Golf seized second place from Ashley Woodman’s SEAT Cupra on the very last lap, and these three podium celebrators headed a large and competitive class with mixed fortunes. Chris Bentley had some early issues in the CTR Alfatune SEAT, later taken over by super-sub Rob Gilham, and ex-servicemen Martin Compton and Warren McKinlay plugged away in the Team BRIT Aston Martin, while an early pit stop for race tape by Graham Roberts in the EDF-run Ginetta G50 was converted to a decent finish by Paul Calladine, who was tailed by two Tockwith-run cars- the Porsche of Marcus Fothergill and Dave Benett, and, atypically down the order, the Ginetta G50 of Sarah Moore and Moh Ritson, Formula W aspirant Sarah having punched above her weight, dicing with the Class 3 Valluga Porsche during her opening stint. Guy Colclough went it alone in the DAT Racing SEAT, and Charles Lamb took the opening stint in the Moss Motorsport BMW M3, before Mike Moss was stymied by power steering issues.

Chris Murphy, driving alone, enjoyed the Class 5 win in his little BMW Z3, ahead of the Honda Civics of Andrew Stewart and Arthur McMahon.