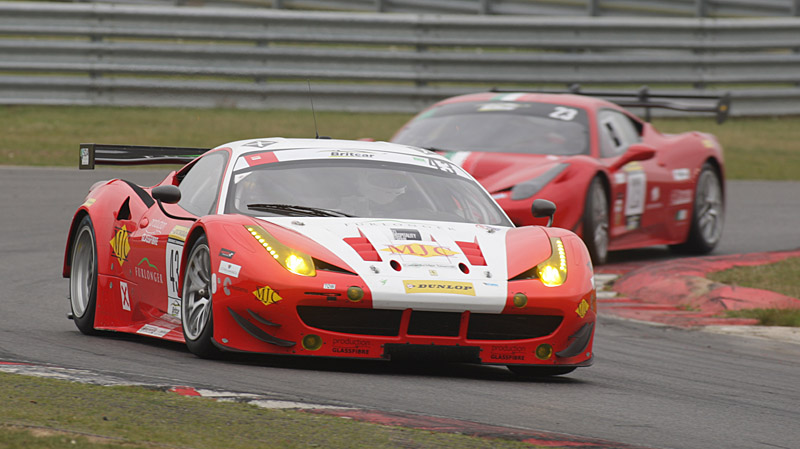 The MJC team marked a return to form in the 120-minute race, with young hotshoe Ross Wylie capitalising on Witt Gamski’s solid opening stint in the Ferrari 458 GTE, finishing over half a minute ahead of the Hudson/Wilcox Aston Martin Vantage GT3, while the Sprint category, run concomitantly but flagged-off after 50 minutes, went to financial expert Laurent De Meeus and pro-driver Jamie Stanley in the ff Corse Ferrari 458 Challenge.

With the grid for this race set by the Race 1 result, Nigel Hudson took the lead from pole in the big Aston at the rolling start, and, after posting a DNF in Race 1, Mike Wilds was starting the #9 Ferrari from the back, with some slower cars to pick off before he would come across the heavy hitters, mainly his own team mates. A dusty moment for Hudson at Murrays towards the end of lap two let Lockie’s Ferrari through, and the Scot commenced to build a lead that he knew would be required later in the race. Wilds had cut through the traffic and was up to eighth on the first lap, but a spin at Agostini thwarted his progress – aiming for the vanguard, now back near the guards van. Impressive in the early stages was Mark Cunningham in the SG Racing Porsche 997, the Class 3 car splitting the ff Corse Ferraris.

Starting from the pit lane, the Woodard Racing MINI was sadly a retiree

The Woodard Mini Cooper had started from the pit lane; the wheel bearing that failed in Race 1 having been replaced by a component sourced outside of the circuit, but it was to no avail, and by lap five Daniel Woodard was pit-bound for retirement. The early stages also saw the close-coupled train of ff Corse Ferraris once more; they had thrown Mark Cunningham’s Porsche out of their party, but he was hanging on to the tail of Graham Lucking’s 458, and not letting go. It wasn’t long into the race – 20 minutes or so – that the Sprint contenders started to take their mandatory pit stops. Marc Brough and Laurent De Meeus were first, handing their ff Corse Ferraris to Andrew Bentley and Jamie Stanley respectively, then Rick Nevinson giving way to Matt Cherrington in the Cayman, young Ed Moore’s Ginetta, and finally, Calum Lockie, from the race lead, handing the GT3-spec 458 to David Mason.

Bentley was back in the pits rather rapidly though, reporting gear selection problems, and after some quick checks by the ff Corse team, returned to the race, though now with the category win stymied, and it was Jamie Stanley now on the move for the Sprint victory, chasing down Mason, and taking the lead with just six minutes of the 50-minute section to go. Ed Moore was called in for a late stop/go penalty, the small Tockwith team under-estimating the pit-stop timing, but this didn’t affect his Sprint position, holding on to fourth place and the Class 4 win, ahead of Rick Nevison/Matt Cherrington’s Cayman, the Class 3 winner’s overnight work after a test-day issue paying off, while at the front, Laurent De Meeus and Jamie Stanley pulled off a classy victory, the pair never putting a foot wrong in the 458, finishing over a minute ahead of David Mason’s GT3 variant, with the earlier-troubled Brough/Bentley machine a lap adrift in third.

There was still an Endurance race going on, however – a quick spin from Bonamy Grimes in the #5 Ferrari at Oggies didn’t lose him second place, but sadly Mike Moss was forced to retire the rather special BMW 1M with power steering failure; "When this car is fully developed we’ll be up there with the Challenge cars" he promised – and with 50 minutes of the longer race on the board, the 60/40 stint split window was open. Witt Gamski, still nursing that severe ankle injury, and now under pressure from a recovering Mike Wilds, was the first to pit, handing over the MJC Ferrari 458 GTE to Ross Wylie, who rejoined in a manageable sixth position.

With no Safety Car periods thus far, it was textbook and planned pit stops for all, with Mark Cunningham, having got the handling of the Porsche sorted, staying out until the last moment and leading the race outright with over a minute’s advantage, before pitting and handing over to dad Peter.

Wylie had moved up the order after taking over, and led the race as it entered the final 45 minutes. Adam Wilcox took a while getting the big Aston up to its optimum pace, the JMH team reporting that it was taking a while to get the new set of Dunlops up to temperature, and it took a late second pit stop for Johnny Mowlem’s Challenge-spec 458 to allow him into second place, by which point a seemingly untroubled Wylie was able to respond to any challenge, and the gap of around half a minute stabilised. The luckless #9 Ferrari was in trouble again though, Dino Zamparelli making a pit call about brake problems that would lead to a few more exploratory laps, then retirement.

With no apparent fuel issues after taking just one stop, Ross Wylie barely broke sweat in sealing the overall win after 62 laps – "I reckon we had enough fuel for another half-stint distance" he admitted, and after a several-season lay-off, it hasn’t taken the compact MJC/Furlonger squad to get back into the swing of things, nor for team boss Witt Gamski to manage his injury. With the added "success penalty" on pit-stop timing, there was little Adam Wilcox could do in the Aston started by Nigel Hudson, and second place was a fair reflection. The thirst of the Challenge-spec Ferraris put paid to any heroics from Johnny Mowlem, and a solid opening stint from Bonamy Grimes not only secured them the Class 2 win and third overall, but also won the local hero the Sunoco Driver of the Day award, with a second fuel stop also afflicting team mates Graham Lucking and Leyton Clarke, who were second in Class 2 and fourth overall.

The Class 3 contenders gave us a great race – the on-form Cunninghams ruled until well into the third phase of the race, though the Team Hard Ginetta G55 of Simon Rudd and Tom Barley, which is establishing itself as the lead pairing of the outfit, was catching the Porsche at a rate which the commentary box calculators reckoned would see the Ginetta just a couple of seconds adrift at the flag. Peter Cunningham upped his game and mounted a robust response, which sadly came undone with a spin at Riches, after which he had no answer to Rudd, who claimed the class victory with 13 seconds in hand. Cunningham had though, spoilt Team Hard’s run of podium clean-sweeps, and there in itself runs a story – the Darron Lewis/Tom Knight G55 was in-line for the final class podium spot, but was awarded a five-second penalty for exceeding track limits, and relinquished the position to team mates Angus Dudley and Callum Hawkins-Roe. Fair play to the Cunninghams, though, their exemplary performance won them a special award for, loosely interpreted, Maintaining Driving Standards. There was another solid showing from Chris Murphy and Dean Gibbs in the Whitebridge Aston Martin GT4, with a seemingly untroubled run to fifth in class.

Class 4 honours were bagged by Rob Hudson and Adriano Medeiros in the Eureka BMW M3 run by Geoff Steel. They were lonely in their class, but nevertheless were there to race and enjoyed some inter-class tussles; "Adriano unlapped himself from the Cunningham Porsche towards the end, and I have shaved five seconds off my lap times over the weekend" said a satisfied Rob Hudson. Similarly, Class 5 victors Alyn James and Dan Wheeler kept their pace in the Synchro Honda Civic Type R, despite the early demise of their Mini Cooper classmate, and a late pit stop by Wheeler that necessitated some laptop investigation.

We head to the Silverstone GP circuit for the next rounds of the Championship, and the points are now identifying who to beat. In Endurance, Team Hard’s Simon Rudd and Tom Barley head the overall and Class 3 standings with a neat and round 100 points, though Class 2 front-runners Bonamy Grimes and Johnny Mowlem are only just behind with 98 points. The Snetterton win has elevated the Witt Gamski/Ross Wylie pairing to third overall and the Class 1 lead on 88 points, just one point ahead of classmates Nigel Hudson/Adam Wilcox, so this will develop keenly through the season. Class 4 is headed by Rob Hudson and Adriano Medeiros, their 66 points making them seventh in the overall picture, and in Class 5, there are, fittingly, just five points between the top runners, with Synchro’s Alyn James and Dan Wheeler on 37 and Daniel Woodard/Davie Birrell on 32 points.

It’s a mixed bag in the Sprint category, by dint of some no-shows at Snetterton and some category-switching at Silverstone, so overall, and in Class 3, it’s the Track Focused Porsche Cayman at the top of the standings at 71 points, with Rick Nevison, Brad Nevison, Sean Cooper and Matt Cherrington having taken or due to take a driving stint, with lone driver Ed Moore on 58 and topping Class 4. Rob Baker and Jonathan Swan have 47 points and head Class 5, in front of David Mason and Calum Lockie, Class 1 leaders on 44 points, while The Class 2 table has just been established, with Laurent De Meeus/Jamie Stanley on 34 points, just three points ahead of ff Corse stablemates Marc Brough/Andrew Bentley/Charlie Hollings.