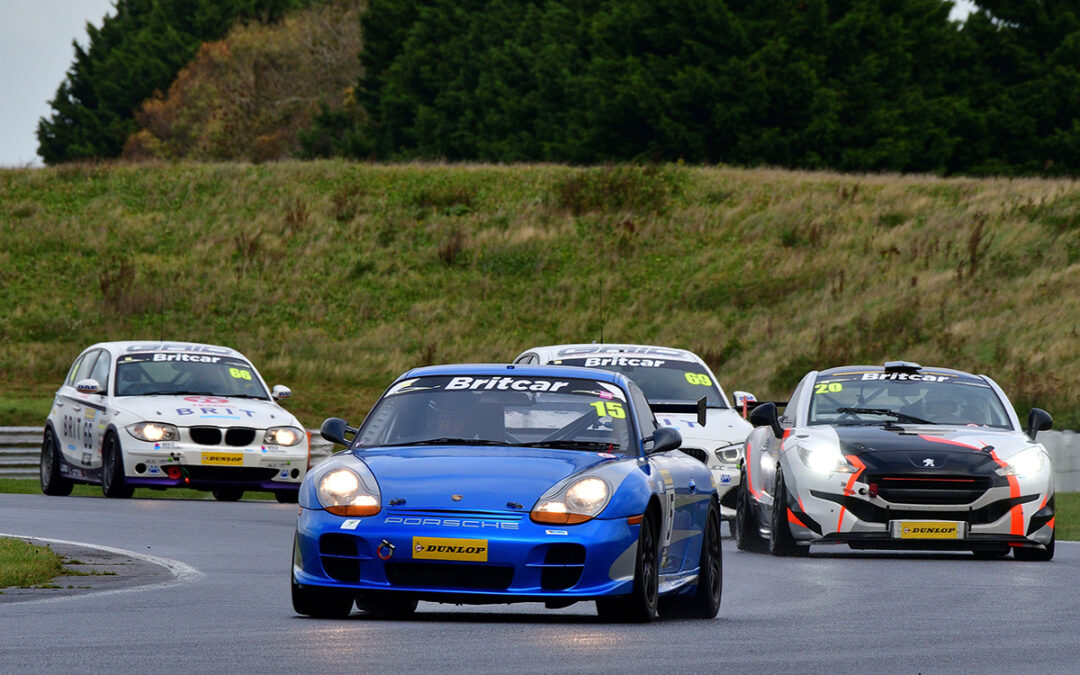 With the weather turning, a call for wets rather than the normal treaded Durezza control tyre was in order as the grid lined-up. Charlotte Birch (Ginetta G40), Rob Smith (Peugeot RCZ) and eventual winner Higgins all made that call instead of lining-up, taking the start from the pit lane, while Peter Spano’s Ginetta G40 and the Smart ForFour of Jon Packer came in from the pace lap, and it was Nigel Ainge, in his Honda Integra that led away from pole at the rolling start, though the power of the machine in the tricky damp and windy conditions caught him out, spinning at Wilson and rejoining at the back of the field. Also falling foul of the conditions was Oliver Smith, his BMW E36 coming to a halt after grazing the barriers in the infield section, necessitating the deployment of the Safety Car.

The race, barely a lap old, saw an unusual situation at the front of the field, with Nick Beaumont’s VW Scirocco, ahead of Tony Prendergast’s similar machine, both Invitation entries inspired by Stewart Lines involvement in the race, and they headed the Clio of Aaron Thompson. The caution was lifted after three laps, and the wet-shod runners soon began to make their mark, Rob Smith very quickly extending a lead to 21 seconds ahead of Higgins before another Safety Car period ensued, to recover Robert Pugsley’s Cayman, which had spun and come to a halt in the infield section. 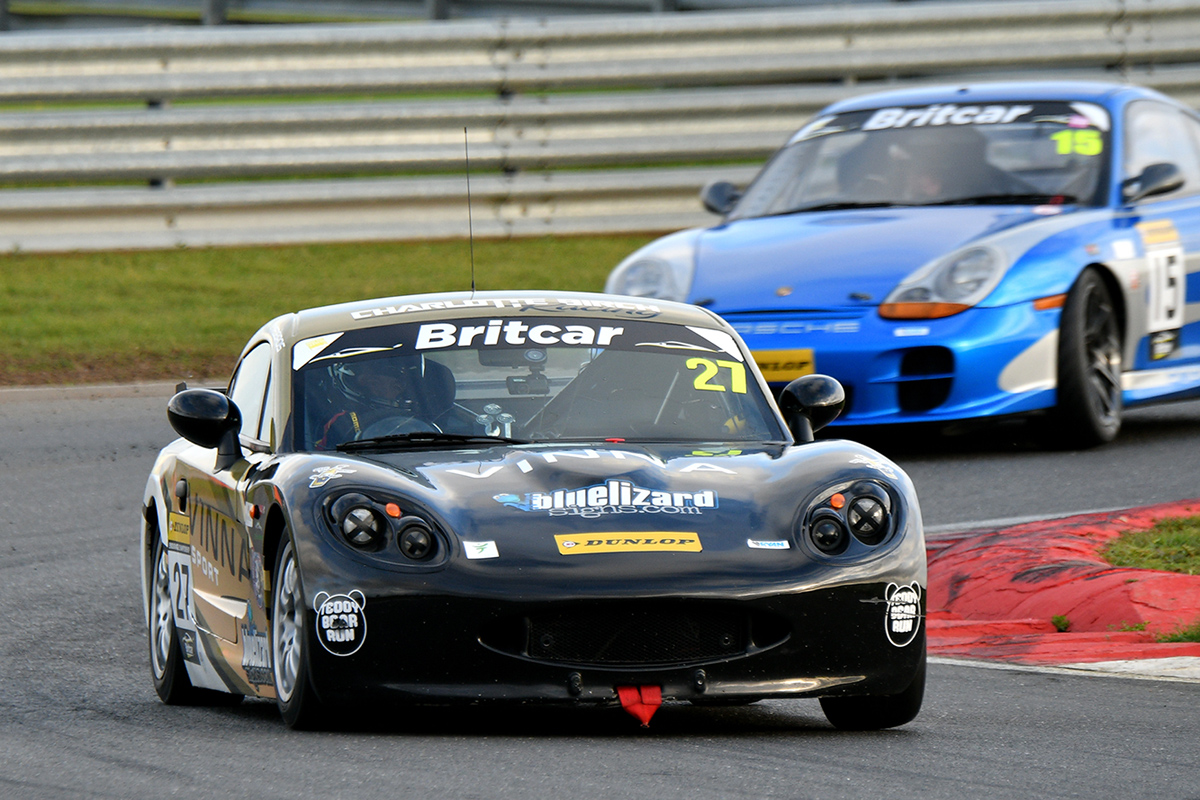 There had been action between the two cautions – Stewart Lines’ Scirocco hand incurred some front end damage, resulting in the bonnet flying off on the pit straight. While most avoided the large on-track debris, Peter Spano’s Ginetta didn’t, the impact seemingly not troubling the G40, but flinging the bonnet to the side of the track, saving the marshals a recovery job, though Lines was called in to the pits by the officials who deemed the VW unsafe to proceed. The second Safety Car period came a few minutes into the pit stop window and those that hadn’t already made their stop dived into the pit lane, one of these being Higgins, who rejoined second behind Prendergast’s Scirocco and then took the lead for the final six laps of the race once the track went green again. Charlie Campbell took over the Peugeot RCZ from Rob Smith, but couldn’t match the pro-driver’s pace, leaving Adriano Medeiros to claim second place in the Vinna Sport Ginetta G40 started by Charlotte Birch, just seven seconds shy of the winner at the flag, after a spirited drive which saw the G40 move ahead of both Campbell, and Rob Baker’s Smart, which finished in an excellent fourth place. The top four finishers all opted for a pit lane start on wets – a good call, it would seem. Matt Evans, in one of the J W Bird Sciroccos, was actually third on the road, but incurred a 52-second post-race penalty for failing to take a stop/go for a pit stop infringement, demoting him to seventh overall, behind stable mate Tony Prendergast, who headed the Class 5 Invitation contingent, with the #96 car, the original race leader with Nick Beaumont at the wheel, finished 13th, in the hands of Britcar returnee Mark Clynes, while the Honda Integra of Nigel Ainge and Danny Casser, a frequent front-runner, suffered from that first-lap spin, and finished 15th overall. Rounding up the Class 5 result, title aspirant Anthony Hutchins held it steady in his Boxster to claim the third-place points, while in Class 6, Peter Spano, assisted by ultra-busy pro-driver Charlie Hollings, came home third in the Ramen Racing G40, seemingly undeterred by the debris-clearing incident. 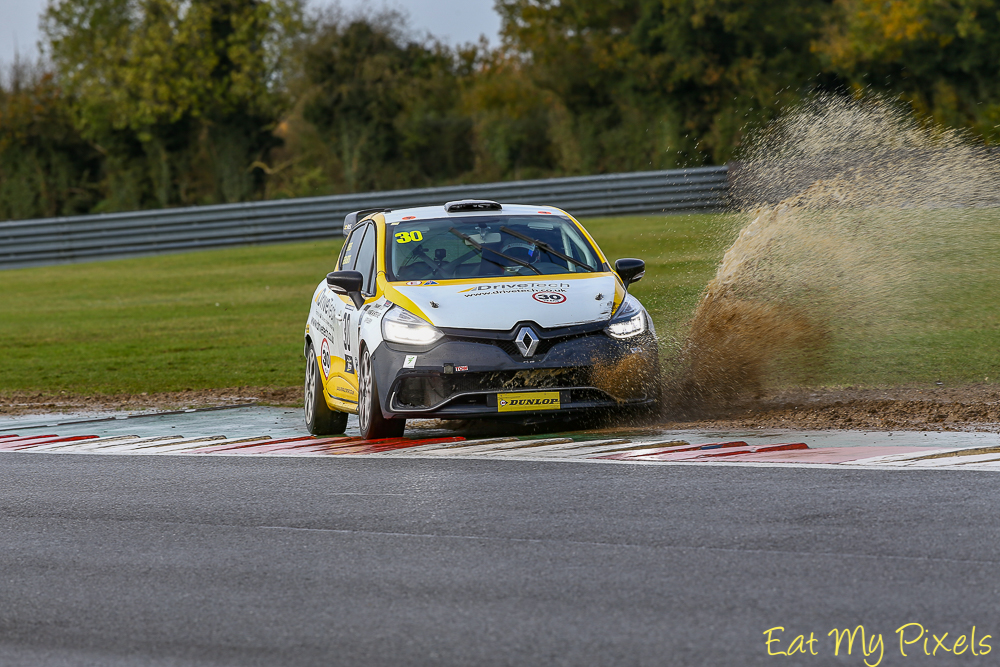 Darren Geerearts and Anton Spires had upgraded their Clio since Silverstone

Darren Geerearts did well in his trade-up from Gen1 to Gen4 Renault Clio, assisted by Anton Spires. Darren was closing in on Alistair Lindsay’s VW Golf for eighth place overall when the flag fell, and it was Lindsay that headed the Class 7 runners, though those top points would not affect his title hopes, the same going for veteran racer Ivor Mairs, second in class in the Paul Sheard MX5, it was in third and fourth places that the title battle reigned, with Jonathan Barrett increasing his advantage in the Saxon BMW 330 over Steve and Edward Cook in their Honda Civic. MacG Racing truckie Kelly Brabbin, fresh from a class win at the previous weekend’s Birkett relay, was the first of the Class 7 invitees home in her Toyota Celica, so another class win for the records, and she headed the three Team BRIT BMW 116s of Matty Street/Andrew Tucker, lone driver Luke Pound, and Nerys Pearce, who had the team’s regular Aston Martin pilot Aaron Morgan co-driving this time.