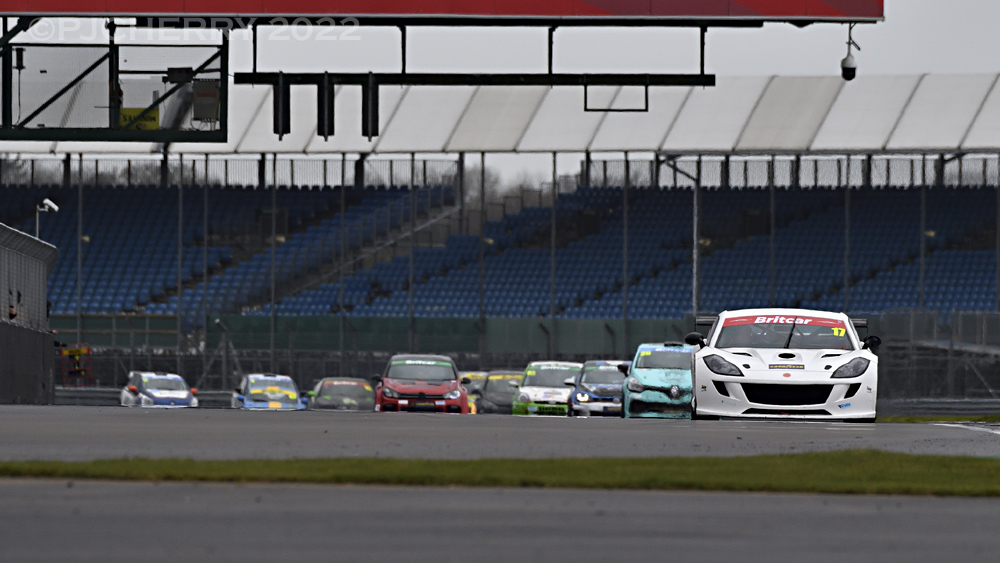 First-timer Sebastien Dubois, in the Motus One Ginetta G55, took a surprise win in the second Britcar Trophy Championship race at Silverstone. A Safety Car period in the late stages of the pit-stop window threw a curved ball into the proceedings, seemingly falling in favour of those that were late-stopping, and could complete a two-minute pit stop within a lap of the Safety Car. 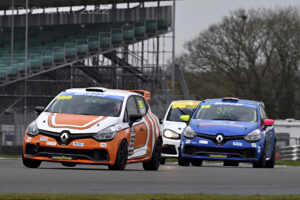 Significantly missing from the front row of the grid was the Frost/Khera BMW, though there was an addition at the back that wasn’t in the first race, and here must surely be the “Spirit of the Paddock” story; The Clio of the Titan team had qualified seventh in class, but experienced gearbox failure during the session. Anxious to get on track, the team, ably assisted by EDF’s Eddie Farrow, located an engine and gearbox on EBay, and dashed to collect it from Milton Keynes, then worked feverishly to get first-stinter Jon Hobbs on the grid for Race 2.

As the lights went out, Owen Hiizzey, starting in Mark Lee’s Ginetta, went into an immediate lead from pole, leaving Jas Sapra with a quartet of Ginettas squabbling in his wake – Van Nederveen, Ian Astley, Jim Edwards and Sebastien Dubois, plus Charlie Hollings’ Valluga BMW – while Kester Cook was quick out of the traps to lead Class 2. Sadly, Luke Handley’s Golf had come to a halt out on the circuit, calling for an early – and short – deployment of the Safety Car. Once the field went green again, Hizzey was off like a robber’s dog, building a commanding lead, while Sapra was busy keeping the squabbling Ginettas, which now had the incursion of Juilan Thomas’s Team BRIT BMW240 amongst them, off his BMW E46’s tail. Sapra released himself by taking his stop  just after the pit window opened, handing over the grey BMW to Bryan Bransom, and Hizzey brought  G56A in for Mark Lee to take over one lap later, but Richard Durham and Julian Daniel were too engrossed in a side-by-side battle for second place in the G40 Cup to consider pitting at this point, while classmate Peter Dilnott’s G40 was stranded in the middle of the circuit, necessitating a second deployment of the Safety Car. 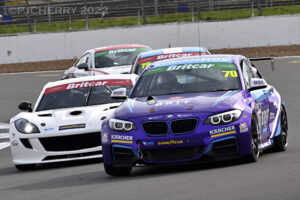 An extraordinary performance from TeamBRIT novice Chris Overend lead to a class win and 3rd overall alongside Julian Thomas of VBox.

And hereby hangs the tale – of the seven cars still left to take their mandatory stops, six were in significant positions, and Dubois, having assumed the lead, was able to get in an out of the pits without relinquishing the top spot, even a later heavy penalty for a short timing having little effect, and once the caution was lifted, with but a handful of minutes left, the surprised novice in the Motus One Ginetta took a win on his first day of racing. Chris Overend, another absolute beginner in the Team BRIT BMW240 was unable to fend off Ryan Parkin’s Audi TT for second place on the final lap, and a fired-up Mark Lee cut through multiple lapped cars to be placed fourth, after some post-race penalties were applied to others, while yet another total novice, Chris Plaskett in the Area Motorsport VW Golf, took home a trophy, fifth overall, and running as an Invitation entry, the third finisher in Class 2. Axel van Nederveen’s Ginetta claimed third in Class 1, ahead of the Invitation-entry G55 of Julian Wantling and Jim Edwards. The earlier front-running BMW of Jas Sapra / Bryan Bransom was penalized for a short pit-stop, which exacerbated their bad luck of pitting early, and they were placed in a mid-field finishing position.

Rising star Charlie Hand was eighth overall, and even after a heavy pit-stop penalty won the Clio class by a considerable margin, earning the Driver of the Day award. Brad Thurston and Matt Cherrington were Clio runners-up, while Westbourne teenagers James Black and Jack Meakin finished less than a second behind to claim the final podium spot Finishing at the back of class, the Titan/EDF entry of Hobbs and Keeble nevertheless did take the flag after the supreme effort to make the race. Kester Cook claimed the Class 2 second-placed points in his re-configured Fiesta, ahead of the delighted Jemco Porsche Boxster pairing of Kevin Hancock and Leigh Smart, Hancock recounting some “epic race-long battles”, one of which was presumably with Paul Goodlad, who finished just 0.379 adrift at the flag, in the JW Bird-entered VW Scirocco. In Class 3, “The Sheriff” cleaned up the town, Anthony Rodgers taking the TSR Golf started by Fynn Jones to the class victory, adding to the friendly rivalry with James Alford in the Saxon Motorsport Golf, who was second, with the Team Hard Golf of Daniel Truman and Jake Owens third, while gearbox issues for the Chandler Golf of Rhys Hurd / Harry Yardley-Rose, and brake concerns for the Orex SEAT  of Harry Rice and old-hand Dave Beecroft saw them finish down in the placings.

Richard Durham responded to a late-race attack by Julian Daniel to make it a second win in the G40 Cup class, with  Luca Hirst / Chris White third  this time. Next up were Stephen Moore and Tony Whitney, while despite issues in the race, Peter Dilnott and Rob Morgan were classified finishers.