TRICO Strong On and Off Track in Britcar eSeries Silverstone 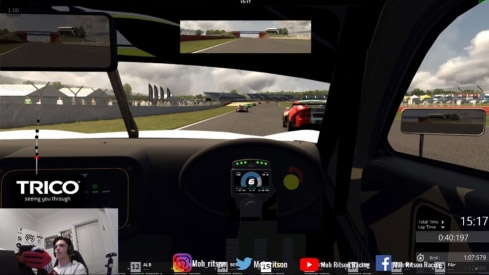 The TRICO-supported Britcar eSeries returned to virtual Silverstone this month for two races and leading wiper blade brand, TRICO was prominent both on track and off it.

Britcar has introduced a virtual version of the real-life series while the Covid-19 pandemic forced the temporary closure of British race circuits, in order to keep itself in front of competitors and public alike.

Having extended its partnership with Tockwith Motorsport into e-racing, TRICO also joined the series as a championship partner in the run-up to Silverstone, with a deal that runs through the rest of the Dunlop Britcar eSeries season.

On track, TRICO was represented by a brace of the instantly recognisable red and white TRICO-branded Tockwith Ginettas for Sarah and Jemma Moore, together with a third car for stable mate, Moh Ritson – all running in the highly competitive Class 2.

The racing in the eSeries is perhaps even more action-packed than its real-life counterpart and, like Britcar itself, competitors’ standings can change dramatically during the course of the race. Jemma Moore and Moh Ritson were running closely together for much of Race 1, with Jemma coming out on top by a fraction of a second at the chequered flag, to come home 4th in category.

Race 2 saw Moh Ritson come good, with an excellent performance netting him the runners-up slot in category and a place, therefore, on the virtual podium. Sarah Moore had looked a possible contender for a class podium in race 2 before a spin mid-way through the race dropped the Britcar Endurance Champion back, allowing sister Jemma through and they finished 21st and 22nd overall respectively.

"TRICO have been involved in Britcar for a few seasons now and we were delighted to be able to support the eSeries. The Britcar organisers have always looked to break the mould and the innovative Dunlop Britcar eSeries is another example of this," explains TRICO’s Senior Marketing Manager, Sam Robinson. "The racing is close and exciting – and gives an excellent feel for its real-life counterpart. Naturally, it is even better when our TRICO cars feature in the shake-up for the leading positions – so congratulations to Moh on his second place in Race 2. I know that he, together with Sarah and Jemma Moore will be looking to bring Trico more on-track success in the coming races."

Replays of the TRICO-supported Dunlop Britcar eSeries races are available to view on YouTube and TRICO’s drivers also share the action across their own social media platforms.

The next round of the Dunlop Britcar eSeries will see the teams returning to Silverstone again, this time to tackle the full Grand Prix circuit. Follow the action from Round 5 of the TRICO-supported series on July 23rd and afterwards on YouTube.