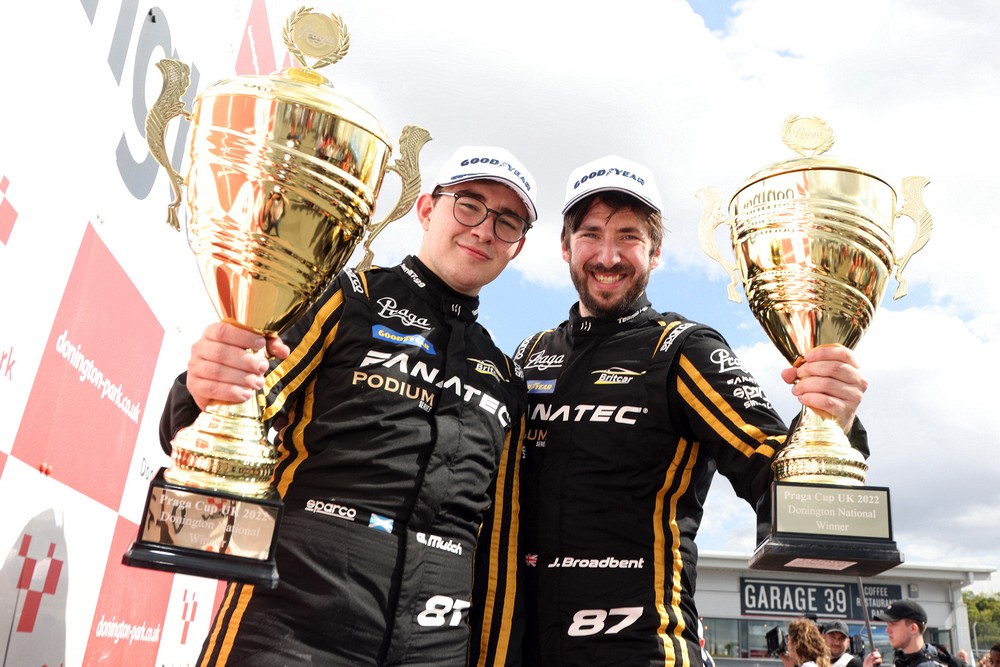 It was Praga Guest Driver Gordie Mutch and Jimmy Broadbent in the Fanatec Praga Team87 R1 that won the opening race at Donington, furthering their championship lead.

Ed and Chris Bridle took a superb second place for Idola Motorsport, a result that reignites their hopes in the championship. Arden Motorsport driver Alex Connor returned to the Cup with a third place, a great result for himself and his teammate, Corey Alleyne, who made his debut in the no.86 Arden by Idola R1. 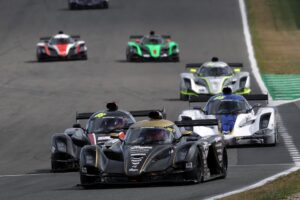 After a brilliant performance in qualifying, it was the UWRacing car that led the way into Redgate with Stefano Leaney holding the lead deep into his stint. RAW Motorsports’ Rob Wheldon had managed to get ahead of his championship rival Mutch; whilst further back, two incredible starts from Alex Connor and Scott Mansell meant they finished lap one in fourth and fifth respectively. But Mansell, on his Praga debut standing in for Ben Collins, managed to pass the GB3 driver out of Coppice on lap three.

The two Mittell Cars R1s, both needing good points, were swamped at the start and were running in seventh and eighth with the Bridle’s no.84 Idola Motorsport R1 ahead in sixth. At the wheel of the no.29, Christopher Wesemael managed to pass the no.84 and then he set his sights on catching the lead pack. Behind, the no.77 of Scott Mittell and Charles Hall then ran into problems, pitting early and never getting back up to race pace. As this was happening, Praga Cup debutant Lewis Appiagyei had moved past Rod Goodman for ninth.

At the front, Leaney had used some stout defending to keep the lead against Wheldon, who then fell back into the clutches of Mutch. The Scotsman then found a way past the RAW Motorsport’s R1 through the Schwantz curve, moving into second. Further back, Mansell had shown great pace in the no.85 R1 and proved his ability in the Praga with a great late dive on the RAW Motorsports no.4 R1 into Redgate, moving into third place.

Leaney, who had been leading since the lights went out, had now been caught by Mutch and the pair spent a few laps nose to tail, coming to blows heading up the hill into Coppice. This contact left the University of Wolverhampton Racing no.11 stranded in the gravel, while the Fantaec Praga Team87 car was able to tentatively carry on, albeit now in third place. The safety car was called out for this incident and also to recover the no.29 of Christopher Wesemael which had pulled up at the Old Hairpin after incurring damage. 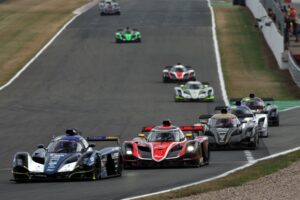 With the safety car out, all of the drivers took the chance to take their mandatory pit-stop. Emerging from the lead was the no.85 now helmed by Jay Morton, followed by the no.4 of Ben Stone and the no.87 of Jimmy Broadbent. At the restart their was a shuffle of places, as Stone fell back to third then came back up to first, but was then forced to pit, all in one lap. Broadbent put his R1 into the lead, passing Morton into Redgate.

From here, Broadbent comfortably brought Goldie 2.0 home to take his and Mutch’s third win of the season and extend their lead at the top of the standings. Behind him Chris Bridle, who had passed Morton early into his stint, chased and chased the lead R1, finishing a season-best second.

Corey Alleyne, having regained third position in his stint, brought his Arden by Idola R1 home on the final step of the podium, completing an impressive debut for himself and an equally impressive return to the series for teammate Alex Connor.

In fourth, Morton scored important points for himself, while teammate Scott Mansell showed great pace in his first time inside a Praga R1. Rod Goodman finished a deserved fifth, spending the majority of the second stint as the only car on track matching Broadbent’s pace. Ruben Stanislaus and Lewis Appiagyei finished sixth in a strong debut showing. Despite both cars running into issues, the no.4 Raw Motorsports and the no.77 Mittell Cars R1s both managed to be classified in the points, finishing seventh and eighth and importantly scoring points.

The UWRacing car and the Mittell Cars no. 29 R1 both failed to finish after their individual incidents.

On the race today, Jimmy Broadbent had this to say “This was best race I’ve ever had” and that “we really had to earn that one”.  On looking forwards to Sunday’s race, simply he said “we’re hoping for another win”. 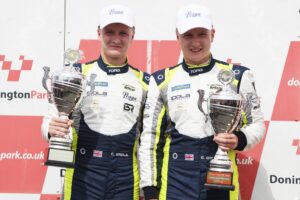 Chris Bridle: “I hope that result puts us back in the championship and am really pleased for the team – we have worked so hard all season and feel like we are back.”

While debutant Corey Alleyne on his first podium “It was awesome, I didn’t expect that.”

Watch the race on the BARC YouTube channel here (https://youtu.be/Zautt03KnAM?t=1748)