We come into the final two rounds of the Championship with the overall title up for grabs, and with 11 best scores out of 12 counting, a prediction would challenge the best Duckworth-Lewis cricket mathematician. 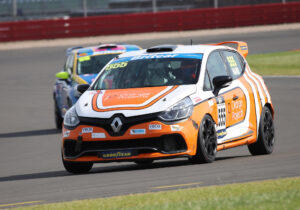 Currently topping the table with 272 points are Chris Overend and James Whitley in the Class 2 Team BRIT BMW 240 – with the Class title assured, they still drop 25 points, so will be depending on a full complement of class entries, including second-placed Paul Goodlad’s Scirocco, to maintain their overall lead over Clio front-runner Charlie Hand, who drops a similar amount of points, but faces a very different challenge of a highly-competitive class, with James Black/James Meakin, Scott Symons and Richard Ashmole all challenging Hand’s early-season domination and potentially denying him valuable points. Currently running third is the Class 3 TSR #77 VW Golf, driven mainly by Rob Taylor and Mark Jones, mathematically unlikely to claim the overall  title, and needing to keep ahead this weekend of the Chandler Motorsport Golf of Rhys Hurd and Harry Chandler Rose, which has less to lose in the dropped scores, and is a contender for the Class title. 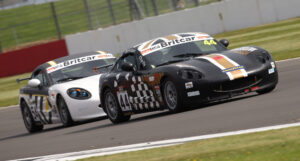 Multiple class victories have elevated G40 Cup leader Peter Dilnot to fourth in the overall standings, and he is likely to bag the inaugural G40 Cup crown, with Julian Daniel fairly safe as the runner-up, though the points status could be influenced by late-season incomer Brendan Haffner, who is on a winning streak at the moment. Such has been the competition in Class 1 that you have to go down to fifth overall to find leaders Mark Lee and Owen Hizzey in the SVG Motorsport Ginetta G55A. They look set fair for the class title though, with the runner-up spot up for grabs between Jas Sapra and Bryan Bransom’s BMW E46, and the Ginettas of lone driver Axel van Nederveen and Neil Wallace / Ian Astley.

So, all to play for, a fitting finale for an exciting season –  there may even be tactics employed to get the best out of the scoring system.