Trophy Round 3 Race 1: Invitees Frost and Khera RSVP With a Win 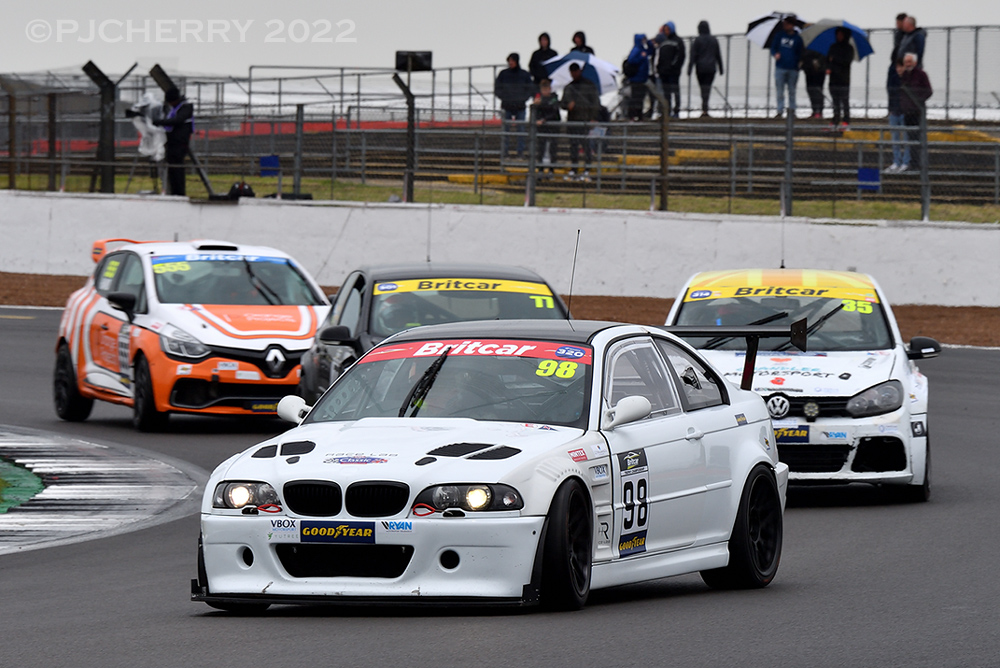 Lee Frost and Lucky Khera love to race, whatever and wherever, and they kicked-off the Jubilee Trophy event with a win in their Race Lab BMW E46.

Early-summer had reverted to April-like conditions for the morning’s qualifying session, and on a tricky track, Frost’s pole time of 1.01.468 was just five-thousands of a second better than fellow invitee Kevin Clarke, who had brought the venerable title-winning Intersport E36 out, to be shared with Aldo Riti, and with drizzle falling as the red lights went out at the rolling start, Clarke made a fast getaway and was off into the distance, mindful of building a strong buffer for Riti to work with in the second half of the race. A spin in the pack at Maggotts for Neil Wallace’s Ginetta G56 caused the Golfs and Clios to take avoiding action, with Harry Rice’s Golf being delayed. 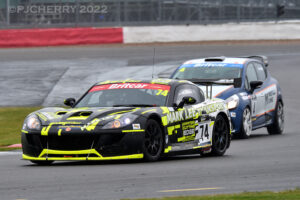 At the end of the first lap, Clarke had a three-second lead over Frost’s BMW, with the E46 of Bryan Bransom close behind, then Jonny McGregor, who had made a storming start in the MacG Racing Mazda RX8, ahead of Chris Overend, splitting up the Class 1 runners in the Class 2 Team BRIT BMW240i. The pre-race weight reduction awarded to the Ginettas had yet to have an effect, and the G56s of Mark Lee and Axel van Nedrerveen were sixth and seventh, ahead of a squabbling group of Golfs and Clios, which would rage throughout the race. Harry Yardley-Rose led the pack in the Chandler Golf, but James Alford in the Saxon Golf was taking no nonsense from the youngsters, and would soon head the group.

Frost began to break away from Bransom, though Clarke responded to an assault on the lead, maintaining the gap from first to second at around  three seconds, and the G56s were now finding their feet, with Lee and van Nederveen now ahead of the Mazda and the Team BRIT BMW (neither of whom made it easy), but trailing the leading trio of BMWs by nearly half a minute, while at other end of the field, the slightly worsening track conditions caught out John Wood’s G40, and saw some slight rubbing between the Clios of James Harrison and Richard Ashmole. Clarke had come up to lap the Golf and Clio contingent, and James Alford, leading that bunch, got on some slippery stuff as he graciously stepped aside, letting the rest get ahead. This group, led again momentarily by Harry Yardley-Rose, was running nose to tail and side-by-side, with pension-drawing Robert Taylor in the black TSR Golf battling with sixth-former Charlie Hand in the leading Westbourne Clio, while TSR team leader Anthony Rodgers was also in the mix, with Clio runners James Black and Scott Symons duking it out too.

Lone driver Charlie Hand assumed the overall lead during the pit-stop sequence, the Westbourne team’s ploy of letting the teenager stay out late playing right into their, erm, hands, as the Safety Car had been deployed just seconds earlier. Some new drivers in trickier conditions had got caught out; Rhys Hurd visited the armco in the Chandler Golf – he re-joined, and made a pit visit for some running repairs, Dave Beecroft had an innocuous spin in the Orex Golf, and Andy Ball, in the G40 started by John Wood, went off at Becketts, requiring the caution period for recovery to be executed. 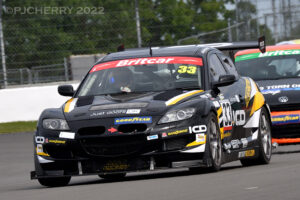 A wave-past in the Safety Car crocodile bunched the field into race order, and the field was let loose with just six minutes if racing left. Lucky Khera, now in the lead, held it to the end, despite a final push by Owen Hizzey, now in the G56 started by Mark Lee. Under three seconds separated them at the flag, with Aldo Riti, having taken over the Intersport BMW from Kevin Clarke, a further 18 seconds adrift in third, a commendable performance since he had barely an hour’s track time in an unfamiliar machine prior to the race. Jas Sapra brought Bryan Bransom’s BMW home fourth, and Class 1 was completed by Josh Tomlinson, taking the second stint in the MacG Mazda RX8, Axel van Nederveen, who suffered a stop/go penalty for a pit-stop infringement in the Datum Motorsport Ginetta G56, with the similar machine of Neil Wallace / Ian Astley having recovery from the first-lap spin stymied by a later penalty for a pit stop infringement. Despite best efforts, they finished in a mid-field position.

Luck or judgement by Westbourne Motors? You make your own choice on that, but the well-timed pit stop by Charlie Hand saw him finish on the overall lead lap, his Clio splitting the Class 1 runners in fifth place overall, a full lap ahead of relative novice Scott Symons’ Motus One machine, and the second Westbourne example of James Black / Jack Meakin, while a further Motus One trio of Brad Thurston / Matt Cherrington, Richard Ashmole and Steve O’Brien / Darren Geeraerts were split by the Max Coates-run car of Jon and James Harrison. 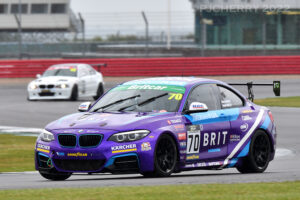 Another exemplary performance in the Team BRIT BMW

Another exemplary performance by Chris Overend and James Whitley in the Team BRIT BMW 240i cliched the Class 2 victory, eighth overall. They had qualified on the second row of the grid, and finished the race two laps ahead of the ever-improving Paul Goodlad in the JW Bird Scirocco, and Harry Rice and Dave Beecroft, who were getting to grips with their new VW Golf.

Class 3 – now there’s a story. Providing, with the interjecting Clios, the closest fights of the race, James Alford won on the road, but was later disqualified for a technical infringement in his Golf, leaving the TSR #7 Golf of Anthony Rodgers and Fynn Jones to take the win, but they were docked a lap for exceeding the maximum stint time, relegating them to runners-up and elevating team mates Robert Taylor and Mark Jones to the top step of the class podium, while third was the Chandler Motorsport Golf of Harry Yardley-Rose and Rhys Hurd, which was delayed by the pit stop to patch-up damage.

The Ginetta G40 cluster provided its own race-within-a-race

The Ginetta G40s ran as a pack in the opening laps as usual, though class winner Peter Dilnot was 41 seconds ahead of new pairing Alex Turnbull and Graeme Bishop at the flag, with third-placed Tony Whitney a lap adrift. Julian Daniel finished several laps down, while John Wood / Andy Ball had done enough before retiring to be classified fifth.