Trophy Round 1 Race 1: Lee and Hizzey Win From Bumper Grid 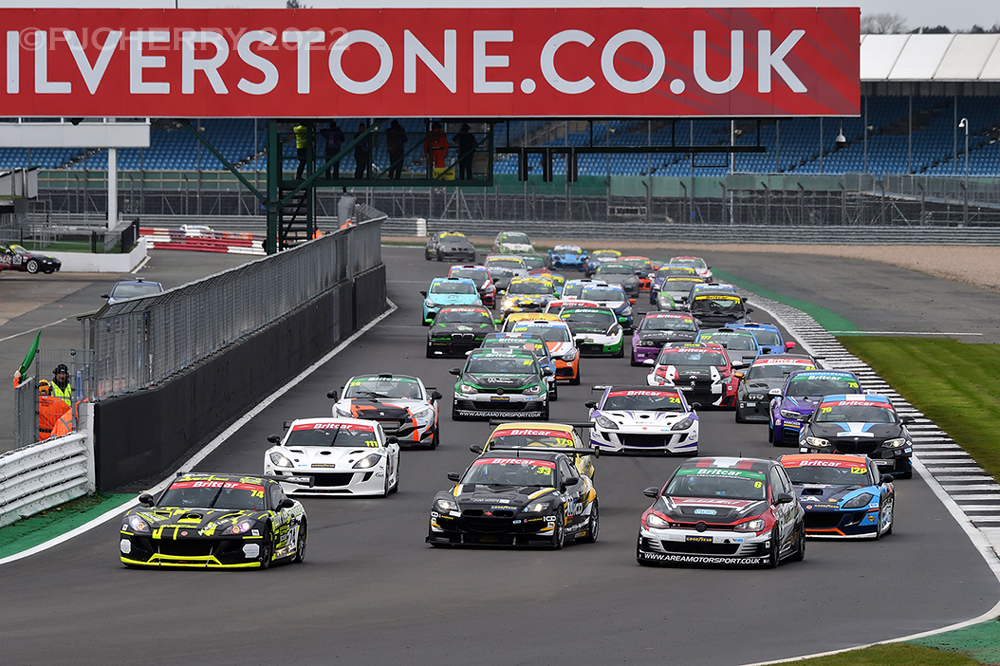 The new partnership of Mark Lee and Owen Hizzey, driving the SVG-run Ginetta G56A, took the win in the opening race of the Britcar Trophy Championship on Silverstone’s GP configuration, from a bumper grid of 51 starters. Lee was a prolific top-three finisher in last year’s championship, taking one win, and the partnership with young charger Hizzey identified that the pair are equally matched.

It wasn’t an easy win though; Nigel Greensall, sharing a Geoff Steel-run BMW E36 with David Gooding made the early running, seizing the lead from Lee at Club on the opening lap, and building just a tenuous buffer over the Ginetta, who headed a train of a particularly racy Axel Van Nederveen (G55A), Jonny McGregor’s Mazda RX8, Rob Baker’s Golf, Julian Wantling’s G55, and Rob Smith’s Peugeot RCZ being tailed by Bryan Bransom in Jas Sapra’s BMW E46. Greensall led up to the pit window opening, and there was a sea-change to the order in the final 15 minutes after the pit window closed. Owen Hizzey emerged in the lead after taking over the Ginetta from Lee, and was a quarter of a minute ahead of Rob Baker’s Area Motorsport Golf. Just one lap later, though, the Golf came to a smoky standstill with a detached downpipe from the turbo. And now, the recovery story of the race – Lucky Khera and Lee Frost, winners of the previous day’s inaugural BEC race, had started 45th on the grid, and Khera’s opening stint saw the BMW E36 midfield by lap one, and in the top 10 by lap five. With Frost now at the wheel, they were sniffing a second victory of the weekend, but could only chip away at the Ginetta’s lead, finishing 10 seconds adrift at the flag. Jas Sapra, too, was going all-out to catch old Brummie pal Frost, posting the fastest lap of the race in the BMW E46 started by Bransom, but the gap was 12 seconds at the end. Some of the earlier front-runners fell by the wayside – Josh Tomlinson took over the MacG Mazda RX8 from Jonny MacGregor, but retired with gear shift issues, and David Gooding spun the erstwhile-leading BMW into the gravel.  Axel van Nederveen continued his racy ways, fourth overall in the Datum Motorsport Ginetta G55, ahead of the similar SVG machine of Neil Wallace and Ian Astley, and the Motus One G55 of Sebastian Dubois, who put in a terrific performance from a mid-grid starting position. Jim Edwards, of the legendary UK racing dynasty, put in a storming closing stint in the Asseto G55 started by Wantling, passing Steve Rothery’s Peugeot on the penultimate lap, but unable to pip the Darkside Motorsport Audi TT of Ryan Parkin at the flag. Darkside, in fact, proved to be the dark horses in this race; running as Class 2 Invitation entries, and starting from 41st and 42nd on the grid, Ryan Parkin’s seventh overall, and Scott Parkin’s 11th in the team’s VW Golf were a revelation. Equally a revelation was Kester Cook’s win in the points-scoring Class 2; starting on the back row of the grid after removing the wings and aero from his Fiesta to move down a class, he struggled for grip and general performance, but it all came to him in the race. He finished ahead of the Rob Smith/Charlie Campbell Peugeot RCZ, and the Team BRIT BMW 240i, driven by first-timer Chris Overend and guest driver Julian Thomas in the class points-paying places. 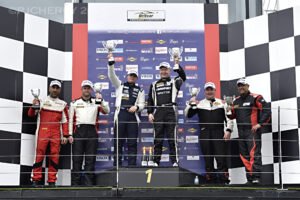 The Class 3 win went to the family-run Chandler Motorsport VW Golf of Rhys Hurd and Harry Yardley-Rose, a superb performance from the two junior graduates in their first Britcar outing, while “the Sheriff” was back in town, Anthony Rodgers, shooting from the lip if not the hip, claiming second in class in the TSR Golf shared with Fynn Jones, ahead of James Alford in the Saxon Motorsport Golf.

The Clio class has expanded this season, with marque experts Westbourne using it as a springboard for their junior graduates, and they didn’t disappoint, with rising star Charlie Hand finishing 13th overall, and a lap ahead of the car shared by team mates Jack Meakin and James Black, while Brad Thurston and Matt Cherrington recovered well from first-lap contact in the Motus One Clio to claim third. These finished ahead of a procession of classmates, Scott Symons/Ed McDermott, Joe and James Harrison, and lone driver Richard Ashmole exemplifying the closeness if the competition, while Ginetta runners in the G40 Cup class similarly raced together as a group, with Luca Hirst making the early running, ahead of Richard Durham, and it was this pair of cars that held it to the end, with Chris White, who had taken over from Hirst, finishing just over a second behind the victorious Durham. Peter Dillnot claimed the final podium place, ahead of Stephen Moore, Julian Daniel, Rob Morgan and Tony Whitney.