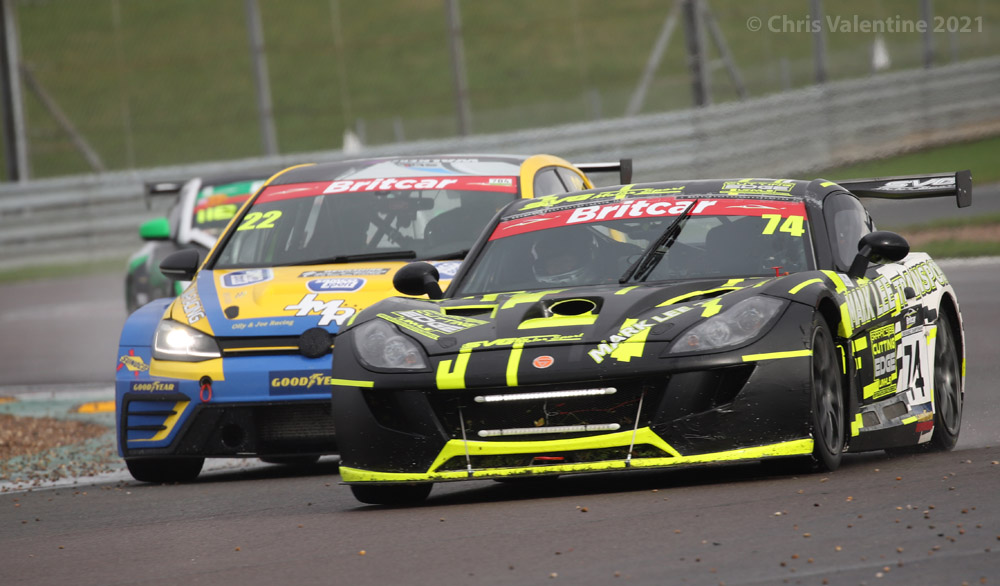 "Up to now he’s always been the bridesmaid" said commentator Tony Coales of Mark Lee’s impressive run of second places, but in Race 1 Lee, in the SVG Motorsport Ginetta G56A, at last graced the top step of the podium.

Earlier rain had turned to drizzle when the red lights went out for the 50-minute race, and Simon Baker converted pole position to the lead in the Woodrow BMW 1M, followed by Lee’s Ginetta, while Kester Cook nominated himself to be the "first lap Redgate gravel trapper" this time, though he was quickly on his way again. The conditions caught Baker out later round the lap, his spin causing Lee to take to the grass in avoidance, both rejoining mid-field, and allowing Axel van Nederveen’S Ginetta G56A to take the lead, followed by a predatory Rob Smith in the Peugeot RCZ. Smith then took the lead, as Van Nederveen had Ollie Turner’s VW Golf to contend with, and Bryan Bransom in Jas Sapra’s BMW E46 just behind. 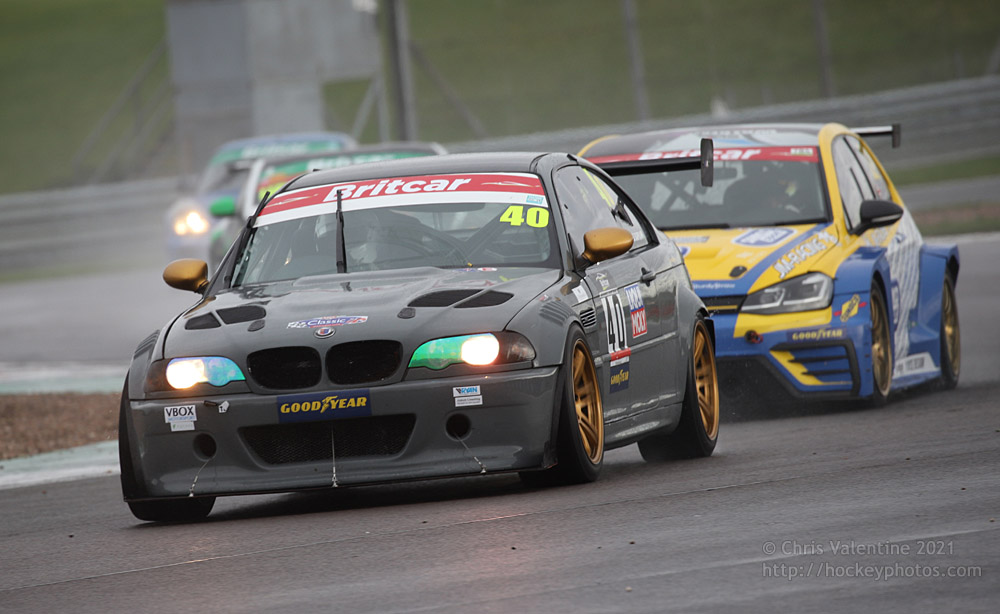 Just three laps in, Van Nederveen’s Ginetta was in the gravel, and with Ellis Bardsley’s Clio stranded too. the Safety Car was deployed, the caution lasting just two laps. Van Nederveen made it slowly back to the pits, but elected not to continue; "it’s not fair, to spread gravel over the track and ruin the race for others" said the respectful Belgian EU finance guru.

Smith began to establish a comfortable lead, with Bransom holding of Turner’s Golf, while Dave May, in the Class 2 Nissan 350z, was hindering Lee’s recovery, ahead of Richard Higgin’s Porsche 996. Aaron Thompson led the Clios, the car having had an emergency gearbox change, and Class 3 had Rob Taylor’s Golf at the front.

The pit-stop sequence saw the retirement of the Woodrow BMW 1M – Simon Baker had contact with a Golf after the restart, and never really recovered, the car experiencing terminal issues as he entered the pit lane, necessitating the Woodrow team to go all-out to fix for Race 2.

Once the field had settled after the stops, Lee had the lead and ran untroubled to the flag, finishing a minute ahead of Class 2 winner Richard Higgins in the County Classics Porsche 996, with the impressive Ollie Turner third in the Invitation-entry Class 2 Golf. Running fourth for much of the race had been the Jamsport Nissan 350Z; Dave May’s early stint was consolidated by Mark Skeets, but their best run yet was stymied by gearbox failure just five minutes from the end, so fourth went to the Team BRiT BMW 240i started by Paul Voakes, and with Andy Tucker staking his claim for a BEC drive next year – only the leading Ginetta was faster in the closing stages, and Tucker took no prisoners, taking Jasver Sapra’s BMW E46 a few laps from the end. Charlie Campbell took over the erstwhile leading Peugeot and finished sixth, while Kester Cook never realised the full potential of the "Kester Fiesta" after the opening lap off, finishing 21st overall. 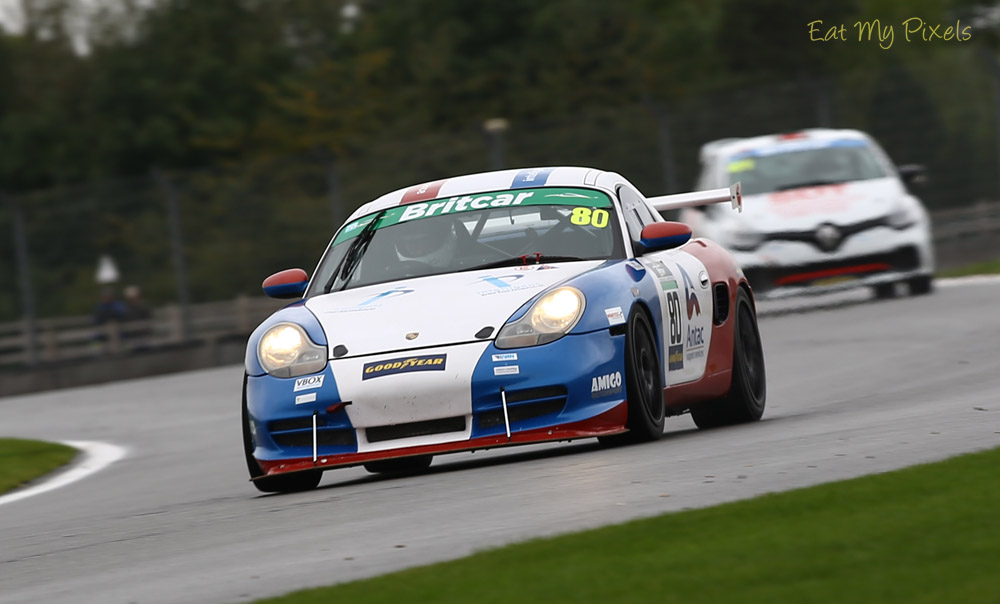 Anthony Hutchins, normally a lone driver, enlisted the vastly experienced Chris Dawkins to assist, and the pair gave the Amigo-run Boxster it’s best result of the season, second in Class 2, ahead of the SVG-run Ginetta G40, regular driver Peter Spano having the peripatetic Adriano Medeiros as his pro-partner this time, the Brazilian putting on a spurt in his closing stint. The Jemco team returned, Kevin Hancock and Leigh Smart having a steady run in the Boxster to fourth in class, while Bill Forbes had trouble with his Ginetta G40 ten minutes from the end.

The Clio class result went down to the wire; The Thompson car had held the lead for most of the race, but a last-lap dash from James Black saw the youngster win by just over a second. Will Powell and Brad Thurston split the points-scorers in the Invitation-entry Motus One Clio, three seconds ahead of the Anton Spires/Darren Geeraerts machine, which led home the Westbourne car of team boss Richard Colburn and Goodwood legend Grant Williams.

Anthony Rodgers and Robert Ellick dominated Class 3 in the Golf – pole, fastest lap, and they were on for the win, but followed team orders to let TSR stablemates Robert Taylor and Mark Jones through to claim the class victory and maximise their points tally, just 0.371 separating them at the flag., and it was great result for first-timer Chris Overend, who debuted with Luke Pound in the Team BRIT BMW 118, third being the best result this season. Fourth went to the Alfa Romeo Giulia of Barry McMahon and Paul Plant, ahead of team mates Steve and Edward Cook’s Honda Civic, while Arthur McMahon’s Civic was a few places further back. Steve Griffiths had a new partner in Tony Draper the Reflex Ginetta G40 – they finished sixth, with the McCormick /O’Donnell Golf picking up several track limits penalties, the similar car of Steven Chandler and Andy Wheatley having an atypical run, down electrical and tyre issues, and the Mazda MX5s of Alister Esam and Colin Wells having comfortable races.