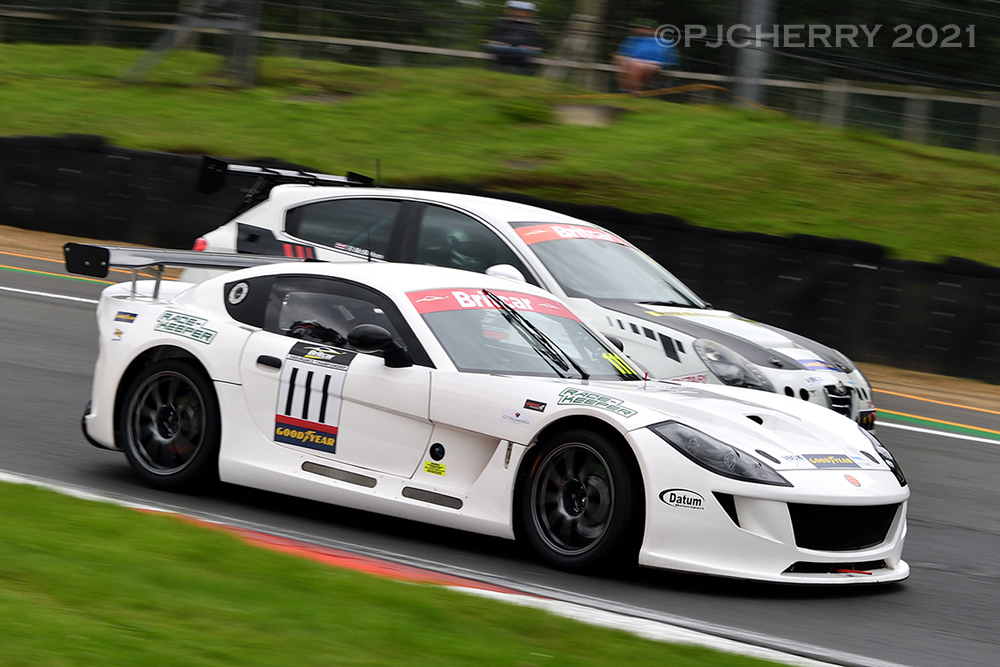 Axel Van Nederveen confirmed his credentials, and that of driver coach Adriano Medeiros, by taking the Race 1 win after a fine solo drive in the Datum Motorsport Ginetta G56A. It might have gone another way though, but for a glitch in the Woodrow Motorsport BMW 1-Series.

It wasn’t great news for the Simon Green team’s two BMW M3s even before the race had started, with the Jas Sapra/Bryan Bransom car relegated to the back of the grid due to a regulation infringement, and the Lee Frost/Lucky Khera machine pushed steamily off the grid after the header tank failed.

With a brief shower dampening the track during the two pace laps, Kevin Clarke got the pole-sitting Woodrow BMW away into the lead at the rolling start, with Van Nederveen’s Ginetta behind, and the fast-starting Peugeot 308s of Steve Rothery and Terry Stephens following. It was a slippery first lap, and front-row starter Mark Lee’s Ginetta G56A had spin in front of the pack at Graham Hill – thankfully all took avoiding action, and he rejoined stone last – while Charlotte Birch spun her Ginetta G40 at the same place, having already avoided a pit-wall crash in an earlier spin across the start/finish line. The conditions also caught out Steve Griffiths’ Ginetta G20 and Tony Davies’ Clio coming down the hill from paddock; the Ginetta rejoined, but the Clio needed to be removed out of harm’s way, and with Jamie Vinall- Meyer’s #47 G20 and Arthur McMahon’s Honda Civic having spins at Graham Hill, it was time for the Safety Car to be deployed.

Capitalising on the conditions were the more nimble Clios, with Ryan Firth’s Class 2 Endurance-spec version up to fourth overall, and the Clio Cup cars of Anton Spires and Aaron Thompson in sixth and seventh positions.

The course went green again four laps later, and Steve Griffiths, his G20 caught in the pack of marauding front-runners, had another spin, while Clarke set about re-establishing his lead, and some got the jump over others on the restart – Rothery moved up to second, with Firth’s Clio initially looking to challenge, while Thompson and Spires swapped places for the Clio class lead. Lee Frost had now joined the race, the overheating issue in the #98 BMW now fixed, and Mark Lee’s recovery drive in the G56A saw him in 10th place. 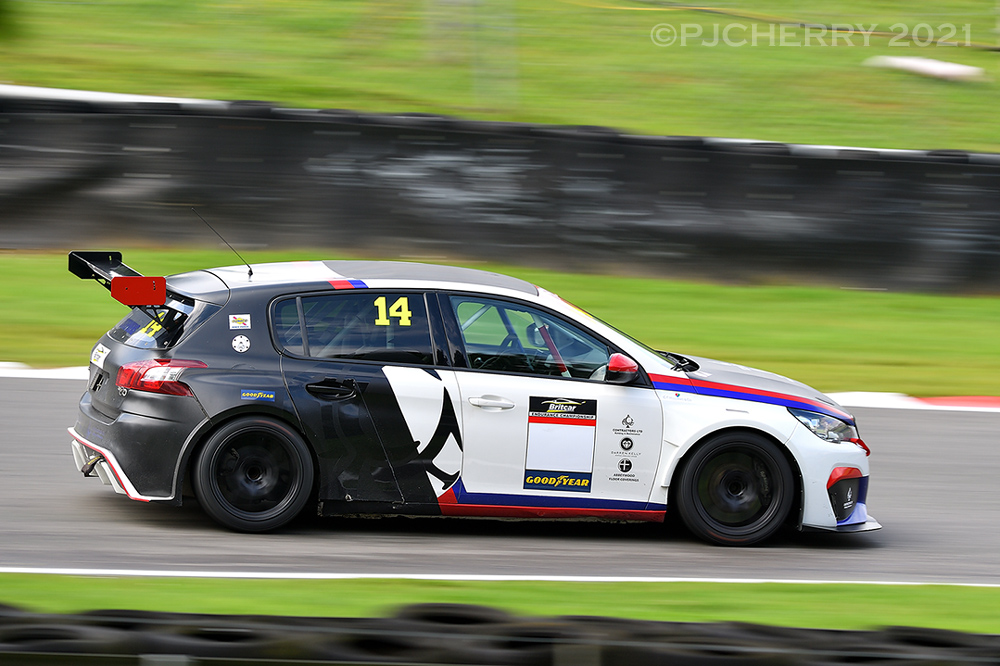 Peter Spano was the first to pit once the window opened, handing over the Ramen Racing Ginetta G40 to Andrew Bentley, then lone-driver Alastair Lindsay’s SEAT, Luke Pound, handing the Team BRIT BMW 118 to Bobby Trundley, and Jamie Vinall-Meyer, who needed to vacate the Reflex Racing #47 Ginetta G20 so that he could rejoin in the team’s #19 car for his final stint. Also making a steamy stop was the MacG Racing Mazda RX8, a hose joint having disconnected, and with other issues to iron out on virtually untested modifications, Jonny MacGregor and Josh Tomlinson would go no further.

There was drama as leader Clarke slowed going up the hill to Druids, the BMW coming to a stop just before the corner, though the car did fire up again, and resumed at racing pace, but the lead – and a number of places – had been lost, and Clarke headed for the pits to hand over to Simon Baker. "It just cut out, and wouldn’t restart, so I was going to roll back onto the grass out of the way, then I tried again and it fired up" said Clarke later.

Further drama ensued, Steve Rothery’s Peugeot 308 and Bobby Trundley’s BMW 118 had clashed; the Peugeot drove up to rear entrance to the inner paddock for recovery, while the BMW three-wheeled back to the pits with heavy frontal damage, both playing no further part in the race. Time for another short Safety Car period, to remove the BMW’s errant wheel from the track, and once the caution was lifted, the SEAT of Alastair Lindsay found itself backed-up in a slow-moving pack down the hill from Paddock, and in an effort to unlock from the group, the SEAT got out of shape and was launched into the Armco side-on. 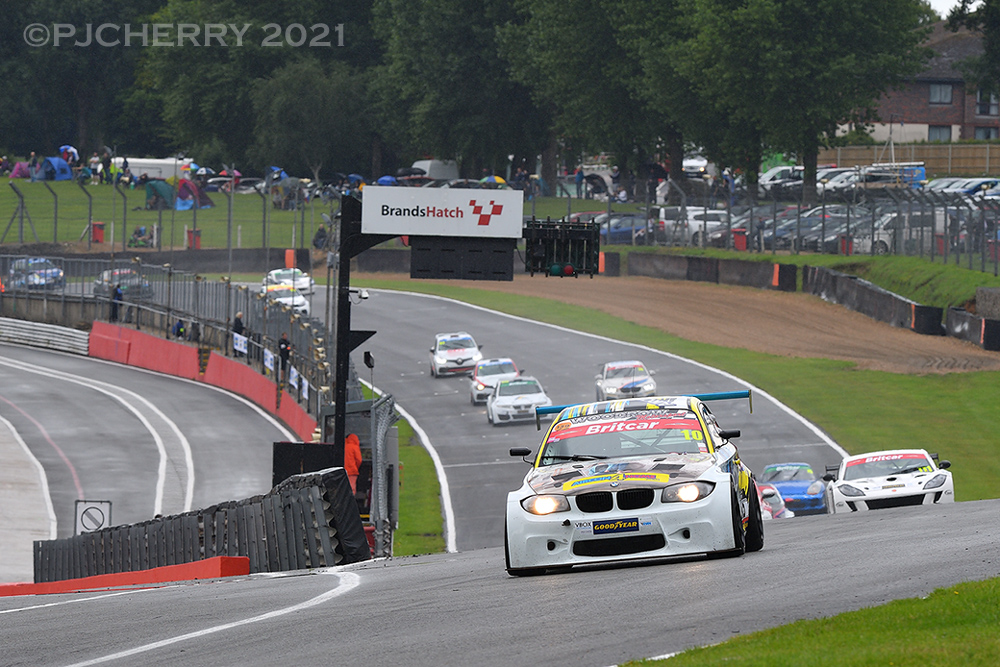 Axel Van Nederveen had taken the lead after the pit stops, with Andy Mollison, capitalising on Ryan Firth’s opening stint in the Preptech Clio, in second place, though the Clio had to give way to the more powerful machinery as the race drew to a close, notably Terry Griffiths’ Peugeot and Mark Lee’s Ginetta G56A, which had recovered from last place on the first lap, and, having taken Griffiths with seven minutes to go, was soon on the tail of the leading white G56A, even nosing in front at one point, though last lap traffic ensured that Van Nederveen could take the victory with a 2.25 second advantage over Lee, and Stephens a further 11 seconds adrift at the flag. Another recovery drive of note was that of Jas Sapra and Bryan Bransom in the SGM BMW E36, fourth place from the back of the grid after some assertive driving. Simon Baker took over the Woodrow BMW started by Kevin Clarke, and ran to fifth in Class 1, sixth overall, while Andy Tucker was a disappointed 12th overall in the Team BRIT Class 1 BMW M240I shared with Charles Graham, and Lucky Khera drove around the issues in the #98 BMW E36 to finish 11 laps down after taking over from Lee Frost.

Mixing it with the Class 1 finishers was Class 2 winner Richard Higgins, making it stick as usual in his closing stint in the County Classics Porsche 996, while the Mollison/Firth pairing in the endurance-spec Clio are showing to be serious class contenders, finishing a lap ahead of third-placed Anthony Hutchins, after the usual solid performance in his Amigo-run Boxster. The Ramen Racing Ginetta G40 was back to form amongst the increased competition, Andrew Bentley bringing the car home fourth, while endurance specialists Ricky Coomber and Mark Simmons had some issues in their debut with the RKC Honda Civic.

The Clios seemed suited to the track and the conditions, with local teenager James Black exploiting the pit stop and Safety Car periods to claim the class win in the Westbourne Motors #67 car, celebrating with his extended family, while Steve and Aaron Thompson were second, and the Motus One pairing of Steve O’Brien and Matt Cherrington completed the podium, with erstwhile leaders Anton Spires/Darren Geeraerts fourth. 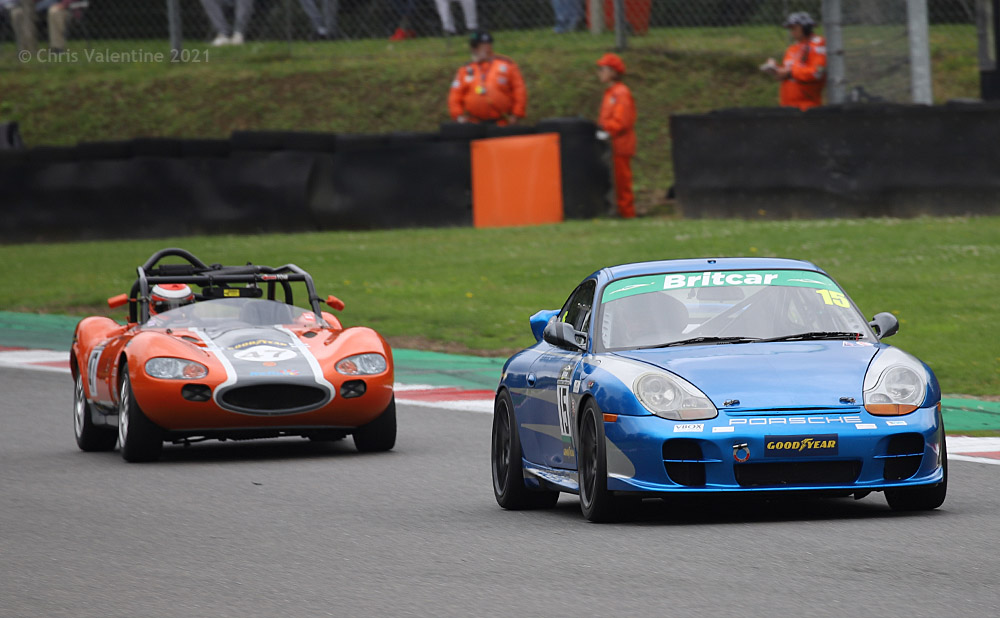 Class 3 was hotly contested, and saw two new frontrunners emerge – the McMahon Alfa Giulietta, and the Chandler Golf, driven by Paul Plant and Andy Wheatley respectively, traded the lead in the opening stages, never more than a second apart, and after the pit stops and Safety Cars, Barry McMahon – in an Alfa allegedly permanently in limp mode – took the class lead from Steven Chandler just five laps from the end, great performances from a car under development, and a team with a very busy weekend running in other championships. Arthur McMahon upheld family honours, finishing third in his Honda Civic, ahead of lone drivers Robert Taylor (VW Golf) and Charlotte Birch (Ginetta G40), and the Reflex Racing duo of open-top G20s, Stuart Gibbons getting the better result than Steve Griffiths, with Jamie Vinall- Meyer having a hand in both cars. Steve and Edward Cook brought their McMahon-entered Civic home eighth, while James Chase made a cautious debut in the Paul Sheard-run Mazda MX5.