Trophy Round 2 Race 1: Victory for Bransom and Sapra in a Busy Weekend 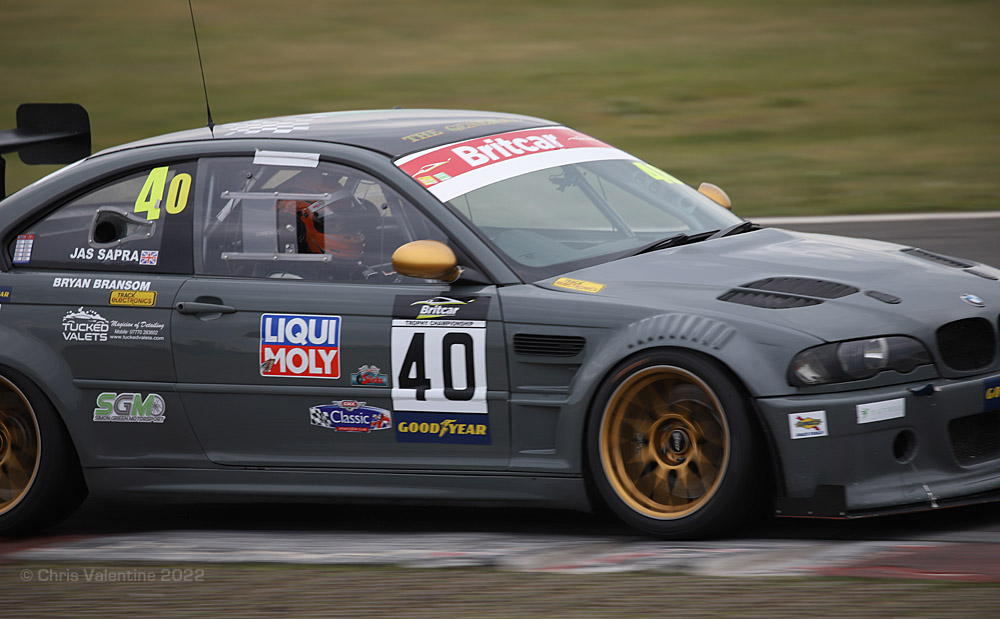 The Invitation entry BMW E36 Niall Bradley won on the road, but attracted a penalty for pitting out of sequence, and was then disqualified due to a technical infringement, leaving friends and occasional rivals Jas Sapra and Brian Bransom to take the honours in Sapra’s BMW E46.

The short version here is that Bradley started from pole, and swept into the distance, maintaining a 10 second gap to Bransom before hitting traffic, when Bransom got back to within four seconds of the Irishman’s E36. Bradley regained the lead with ease after pitting out of sequence (there were two groups), though slowed a few laps from the end, allowing Sapra, having relieved Bransom in the cabinet-grey E46, to get within sniffing distance, but sped up again on the final lap to claim victory with a nine-second margin. 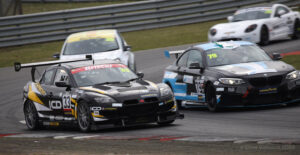 The start was delayed due to William Lynch’s BMW E46 having to be towed off the grid, then Sunny Gill’s BMW overheating because of the delay. Once the race did get going, Bransom headed a spread- out group of the Ginetta G56 of Mark Lee, Jonny MacGregor’s Mazda RX8, Callum Noble’s BMW, the Ginetta G56 of Neil Wallace, and, spectacularly ahead of more powerful machinery, youngster Harry Yardley-Rose in the Chandler Motorsport VW Golf. Axel Van Nederveen started from the pit lane in his Ginetta G56, and was making short work of cutting through the pack. Once he did get into contention, he joined the back of a tussle between Noble and Wallace, vying for fifth place, but the Belgian spun his white Ginetta at Agostini, and in the confusion Wallace got past Noble. It was inconsequential though, as Noble’s purple BMW threw a rod  along the pit straight and came to an extremely smoky demise.

Once the two-stage pit stops were all taken, Nigel Greensall’s stint in the BMW E36 started by David Gooding was disturbed by an 18 second penalty for pitlane speeding though it didn’t have an effect as he parked-up shortly after with suspension failure. As the race drew to a close, Ian Astley, in the Ginetta started by Wallace, was taking chunks out of the gap to third-placed Josh Tomlinson, now in the MacG Maxda RX8. He did it on the final lap, depriving MacGregor and Tomlinson of the final podium spot. So Sapra took the flag to win, his gesticulations as he did so identifying that he aware of the penalties to his rival ahead, with Owen Hizzey second, in the Ginetta started by Lee. Van Nederveen recovered from his spin to finish fifth, and the only other Class 1 finisher was the BMW of Sunny Gill and Jagleet Virdee, 24th overall, which overheated on the grid and had to have a core plug replaced before starting.

Class 2 was won by Justin Dodge and Charlie Hollings in the Valluga BMW M4. Chris Overend was the early class leader in the Team BRIT BMW 240, heading Dodge and Paul Goodlad in the graphically-titled Limb Torn Off Racing VW Scirocco. Once pro-driver Hollings took over the Valluga machine, he stamped his authority, and Goodlad took the runner-up spot when James Whitley, who had taken over the BRIT BMW, pulled of with excessive heat in the engine bay – it wasn’t as bad as first thought though, and he rejoined to claim the final class podium spot. 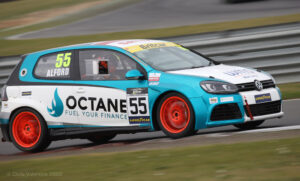 The Class 3 win went to James Alford in the Saxon Motorsport Golf, finishing under four seconds ahead of the Chandler Golf of Rhys Hurd, who had taken over from Yardley-Rose. “I passed the right people at the right time” said Alford, one of those being the Golf of Rob Taylor and Tony “The Sherriff”  Rodgers, which finished third despite Rodgers’ late-race push. The Team HARD Golf of Jake Oweens and Daniel Truman sustained sone damage on it’s way to fourth, and the two Whitebridge Invitation entry BMW Z4s of Callum Bates and Chris Murphy had good runs to fifth and sixth, with the SEAT of Dave Beecroft and Harry Rice completing the class finishers.

There was action in the Clio class in the opening laps – Richard Ashmole led initially, but dropped to third when passed by Westbourne stablemates James Black and Charlie Hand. Once the pit stops were over, Jack Meakin had taken over from Black and retained the lead, ahead of Ashmole, while Hand had to contend with third after being delayed by needing push start from his pit stop. Jon and Giles Bilingsley were fourth, followed by new pairing Steve O’Brien and Darren Geeraerts in the ex-Thompson Clio. 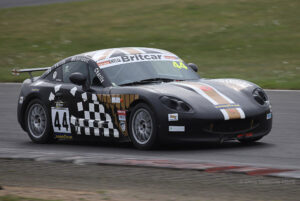 Peter Dilnot led all the way in the G40 Class, followed by Stephen Moore and Julian Daniel, but after the pit stops Daniel got the jump on John Wood, who had taken over from Moore, to finish second. Jez Sussex / Tony Whitney, Andy Ball and Rob Morgan completed the finishers.