Trophy Round 3 Race 2: A Win Double for Lee and Lucky 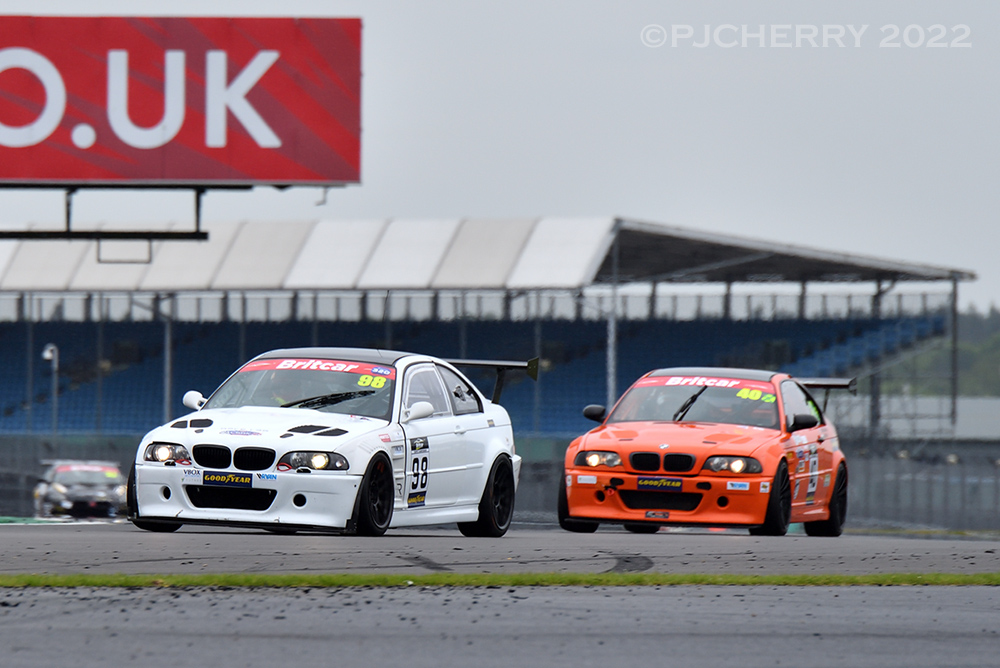 It was a textbook win in Race 2 for Lee Frost and Lucky Khera in the Race Lab BMW E46, while two significant opponents made early retirements. 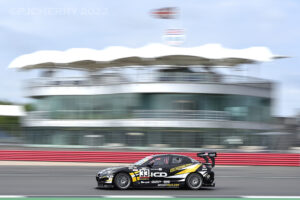 Khera took the start this time, and led away from pole, though behind him there was frantic action as the Ginetta G56s, making use of their weight reduction in better conditions than Race 1, hurriedly attempted to make an impression – Owen Hizzey maintained second place, Axel van Nederveen used all of the track and a bit more to get past fast-starting Josh Tomlinson’s Mazda RX8, which took a nudge as Ian Astley’s G56 got past too, recovering impressively from a mid-grid start. Within a couple of laps the BMWs put some manners on the Ginettas though, Aldo Riti’s Intersport E36 and a fired-up Jas Sapra in the Simon Green-run E46 both demoting Hizzey to fourth place, leaving the three Ginettas line astern, ahead of James Whitley’s Team BRIT BMW240i, Tomlinson, then Charlie Hand leading the marauding Clio/Golf pack.

Sapra was clinging to Riti’s E36 like a cheap suit, but a moment of over-exuberance saw the E46 come unstuck at Becketts, and ended broadside across the track, causing the field to scatter around. Unable to get the car started again, the orange E46 was stranded and the Safety Car was deployed. Also in trouble was Aldo Riti, the left front wheel askew on the second-placed Intersport BMW ss he slowed and pulled off on the pit straight – two front runners eliminated within a lap. 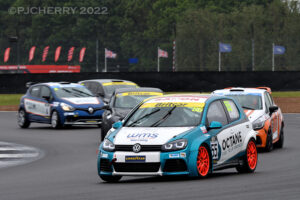 James Alford was a man on a mission after his Race 1 disqualification, and made short work from the back of the grid to take his Golf to second place in Class 3, behind Mark Jones’ similar car, the pair sandwiching Charlie Hands’ leading Clio, and, as earlier, the Golfs and Clios were side-by-side and nose to tail, with Rhys Hurd, Scott Symons, Richard Ashmole, Jack Meakin and Brad Thurston all in the mix.

It was a short dash to the pit-stop period once the caution was lifted, and while Khera maintained his lead, van Nederveen  wasted no time in seizing second place from Hizzey just millimetres after they crossed the timing line, and next time around the trio of Ginettas – van Nederveen, Hizzey and Astley, were in a close line again. Hizzey pitted first, van Nederveen drew away and Astley then had James Whitley’s BMW 240i on his tail, while Tomlinson was keeping it steady in the MacG Racing Mazda RX8.

A brief cease of hostilities during the pit stop sequence was followed by a raft of penalties – van Nederveen’s rapid restart from the Safety Car earned the Dutchman a drive-through penalty, a similar penalty being awarded to erstwhile Class 3 leading Golf, now with veteran Robert Taylor at the wheel, while Mark Lee, having taken over the G56 from Owen Hizzey, was called back in to take a one-second stop/go. Making a voluntary second stop was Chris Overend, who had taken over the Team BRIT BMW from Whitley – an errant object in the car was located and removed, and he was back on his way.

With no success penalties hindering their pit stop time, MacG racing had got the jump on their classmates, and Jonny McGregor, now in the Mazda RX8, briefly held the lead, but had no answer for the Race Lab BMW, which had Lee Frost taking the closing stint.  Frost was 19 seconds to the good when the chequered flag fell, ahead of the Mazda, redemption for MacGregor, Tomlinson and the MacG team, their best Trophy result so far, the first of the registered Championship runners, so hauling in some tidy points. Ian Astley’s storming opening stint in the #24 SVG G56 was rewarded by Neil Wallace taking third place, with no success penalties, nor bad-boy penalties, unlike van Nederveen and Mark Lee, who nevertheless made last-gasp dashes that saw the three Ginettas covered by less than half a second across the finishing line. 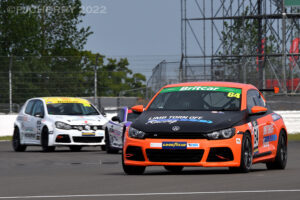 The Team BRIT BMW240i lost the Class 2 lead to Paul Goodlad’s Scirocco after the second pit stop, but the two hand-controlled cars were together in the closing laps, with Chris Overend taking the win by just under five seconds, with the borrowed Golf of Dave Beecroft and Harry Rice third after having time added on for a pitlane infringement.

The Clios – WOW, the Clios! The short National circuit certainly brought them together. James Black came from behind, taking three classmates in as many laps to seal the win, ahead of Charlie Hand, who was just 0.186 behind at the flag, and less than a second ahead of Scott Symons, while fourth-placed Richard Ashmole was only a quarter of a second to the good of Matt Cherrington, with Joe and James Harrison, and Steve O’Brien/ Darren Geeraerts completing the top seven.

Despite an ailing clutch, James Alford, in the Saxon Motorsport Golf, showed the way in Class 3, while the Chandler Motorsport Golf excelled once again with Rhys Hurd and Harry Yardley-Rose, the latter earning a well-deserved Driver of the Day award. The Mark Jones / Robert Taylor Golf was third, while TSR team mates Anthony Rodgers and Fynn Jones retired with a gear case issue.

Peter Dilnot claimed the G40 victory yet again, ten seconds ahead of Julian Daniel, who, in a spread-out field, had half a minute over Tony Whitney, with John Wood/Andy Ball and Alex Turnbull / Graeme Bishop next up. The top three finishers are now also the top three points scorers, with Dilnot just a few points off the overall Trophy lead.