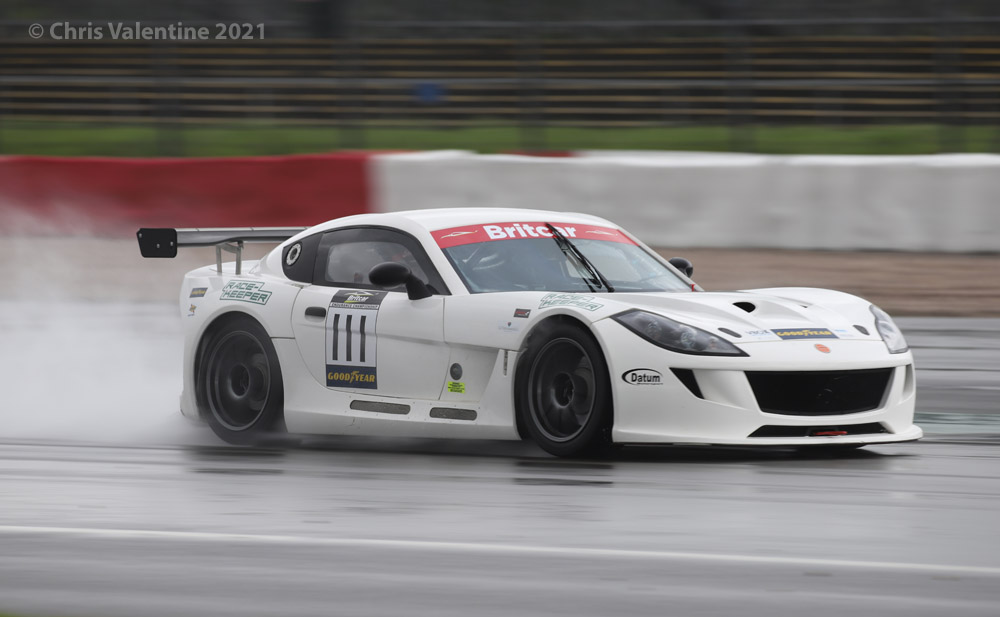 Race 2 saw another win for Axel Van Nederveen and Adriano Medeiros in the Datum Motorsport Ginetta G56A, again with a gap of over half a minute to the second-place car, which this time was Mark Lee’s same-spec Ginetta, though the race was a very different story from the day’s earlier encounter.

Wit h the grid set by the second-fastest time in the fraught qualifying session, it was Andie Stokoe’s BMW 240 which led the pack away from pole, with fellow front-row sitter Lee behind. By the end of the first lap, though, Lee was in the lead, with Van Nederveen second. Falling back to 19th place was Ollie Reuben in the Woodrow BMW 1M, after an off-track excursion, and slipping back less drastically was Stokoe, down to fifth as Steve Rothery’s Peugeot 308 and Rob Smith’s repaired RCZ made up places, with Richard Evans’ BMW 240, Richard Higgins’ Porsche, and after an amazing start, Anton Spires’ Clio also in the running, while Steve O’Brien’s Clio made an early pit stop, as did Richard Avery, with suspension issues on the Boxster.

A significant clash at Club between Sean Woodard’s Mini Challenge and the Golf of Fynn Jones saw the Safety Car deployed, and an unrelated retirement for the Honda Civic of Edward Cook, with engine issues. The pit window opened three laps into the caution period, and just 10 cars opted out of the opportunity to pit, and by the time the field went green again, two laps later, just three cars were yet to take their stop, including last man standing Anthony Hutchins, who inherited the lead in his still-smoky Boxster. Maybe the consequences of a congested pit lane, but there were a few stop/go penalties awarded for short stops, Mark Lee’s Ginetta, Steve Rothery’s Peugeot, and Simon Baker, now in the Woodrow BMW 1M, being culprits.

Lee’s punishment was exacerbated by losing the lead due to his enforced stop, and Adriano Medeiros, having taken over the white G56A from Van Nederveen assumed a lead that he would never relinquish, plus, with the 6pm curfew looming, the win came closer as the race was truncated to 40 minutes duration. A late-race puncture for David McDonald’s BMW, at that point running third after Stokoe’s solid stint, dropped them out of contention, so Medeiros again took a text-book win, with Lee having to fight back through the field to claim second place, and the amazing Richard Higgin’s coming home third overall, and taking the Class 2 victory in his Porsche 996, which earned him the Driver of the Day award.

Those last few laps did see some action – a recovery drive by Shane Stoney in the BMW 240 started by Richard Evans saw him just miss out on the Class 2 win by a quarter of a second, after taking the Andy Mollison/Ryan Firth Clio, which had always been in contention, and was just two seconds adrift at the flag. That’s the top three Class 2 finishers covered by two and a half seconds at the finish.

Simon Baker, in the Woodrow BMW 1M, finished fourth on the road but was demoted down to sixth after the officials slapped a post-race 30-second penalty on him, though he retained third in Class 1, and fourth was midfield finisher Charlie Campbell, who had taken over from Rob Smith in the Peugeot RCZ, with the Kan Yan BMW 240 stymied by that late-race puncture for McDonald, and the similar Team BRIT car of Andy Tucker and Paul Voakes cruelly stopping out on the circuit with just minutes to go. The Class 1 Invitation entry, the BMW M3 of William Lynch finished 18th overall. The Peugeot pair of Steve Rothery and Terry Stephens were separated by just 0.343 at the flag, fourth and fifth in Class 2, ahead of the Peter Spano/Andrew Bentley Ginetta G40, and the Jamsport Nissan 350Z of Mark Skeets and Dave May, now seemingly out of limp mode, followed by Andy Porter’s Boxster, Alistair Lindsay’s SEAT, Bill Forbes’ Ginetta G40 , late-stopper Anthony Hutchins, and Chris Murphy’s BMW Z3. A little further down the overall standings, Kevin Hancock and Leigh Smart had a better race in the Jemco Boxster, with the similar car of Lawrence/Avery held up by that early unplanned pit stop (plus they incurred a 30-second penalty), while the two class Invitation entries , the Z3s of Callum Bates and Stefan Murphy finished 17th and 23rd respectively, after a busy day competing in several other races. 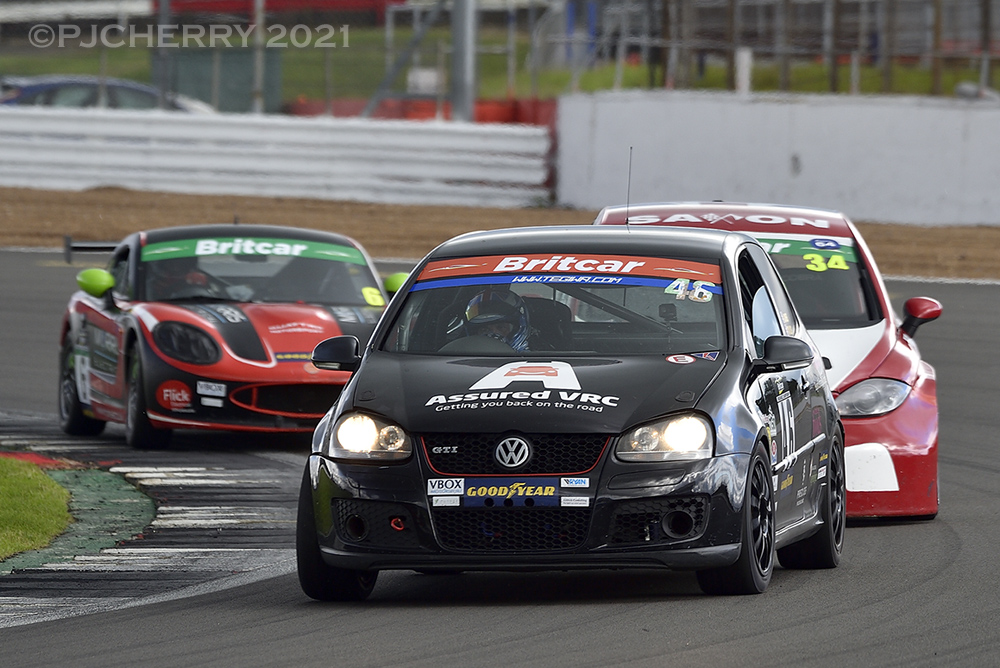 Class 3 was headed by the Rob Taylor/Mark Jones Golf, ahead of Barry McMahon/Paul Plant Alfa Giulietta, a great return to the podium for erstwhile race winner McMahon, while it was a delighted Charlotte Birch claiming the third-place trophy in the Vinna Sport Ginetta G40, but it was disappointment for Jamie Vinnal-Meyer and Steve Griffiths – their Ginetta G20 was second on the road, but tumbled down the order after the officials awarded them a 30-second post-race penalty, finishing behind Arthur McMahon’s Civic and the Team BRIT BMW 118 of Luke Pound and Christiern Dart.

In the Clio class, Darren Geeraerts capitalised on the stunning opening stint by Anton Spires to take the win, ahead of the father and son duo of Steve and Aaron Thompson, ahead of lone drivers Sarah Franklin and James Black, while the O’Brien/Cherrington car completed the racebut was five laps down after the early pit stop.