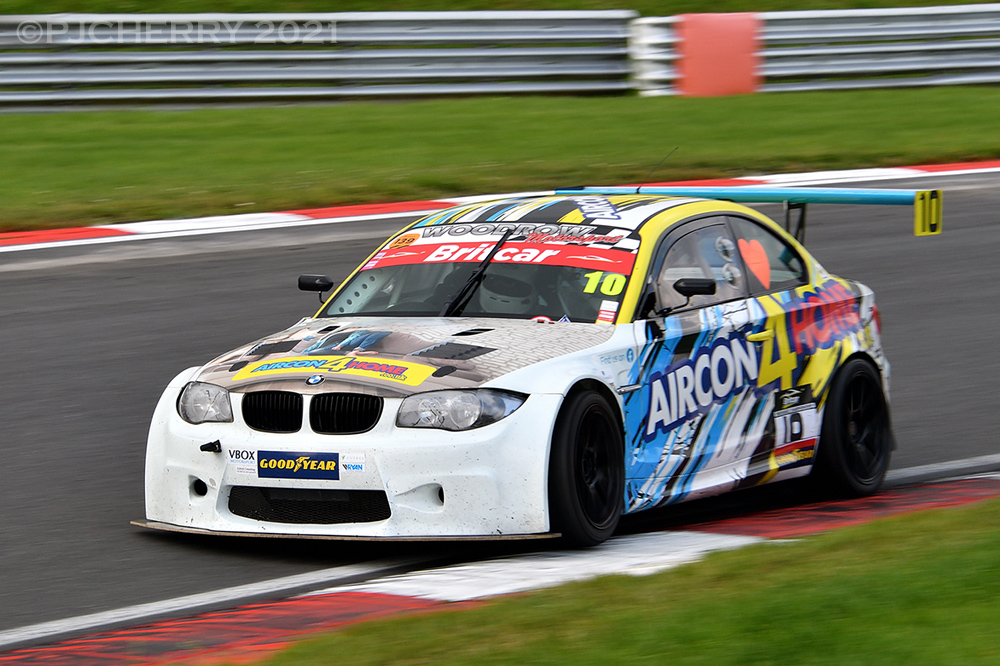 Simon Baker and Kevin Clarke, in the Woodrow Motorsport BMW 1-Series, took a convincing win in Race 2, finishing nearly a lap ahead of the opposition, who had an epic battle for the podium places.

Baker took the lead from the rolling start, with Mark Lee’s Ginetta G56A barely a second adrift, keeping this up until Baker pitted 23 laps in to hand over to Clarke. Axel Van Nederveen held third until, unsettled in traffic, the white G56A had a spin at Graham Hill, only to go off at the same place next time round, rejoining in 10th place. Steve Rothery was an early pit visitor, repairs to his Peugeot 308 after Race 1 not being effective, and the car would be retired after a few more trial laps. Jas Sapra held fourth place in his BMW E36, ahead of sensational Class 2 leader Andrew Bentley in the Ramen Racing Ginetta G40, and Terry Stephens’ Peugeot 308.

Moving up, though, was Andy Tucker in the Team BRIT BMW M240i, proving a point and atoning for his Race 1 dissatisfaction. Carving through the field, he pulled chunks out of the gap to Stephen’s Peugeot ahead, seizing fifth place as they crossed the line on the 13th lap. Stephens regained the place seven laps later, but this had been a valiant effort from the Team BRIT driver, who races with a physical disability but eschews the convenience of the car’s hand controls, a performance that earned him the Sunoco Driver of the Day award.

A further atypical off-track excursion for Van Nederveen’s Ginetta, this time at Clearways, saw him pitbound, just as the window was opening, and now down in 20th place.

Baker was one of the first contenders to take the mandatory stop, handing the leading BMW 1-Series to Kevin Clarke, and this preceded a flurry of pit visitors, leaving Jas Sapra’s E36 in the lead, with the impressive Andrew Bentley second in the Ramen Ginetta G40, and Andy Tucker’s third place about to be taken by Richard Higgins in the County Classics Porsche 996. Tucker pitted late, but with a puncture, and then the Team BRIT M240i failed to fire up for Charles Graham’s stint, leading to retirement 34 laps in. Bentley, now having assumed the lead, was the last to pit, handing the G40 over to Peter Spano, and once all stops were taken, Kevin Clarke held a 36-second lead over Mark Lee’s Ginetta G56A, with Bryan Bransom, now in Jas Sapra’s BMW, third. Peter Spano was holding on to the Class 2 lead, but soon had to give best to Higgin’s Porsche. 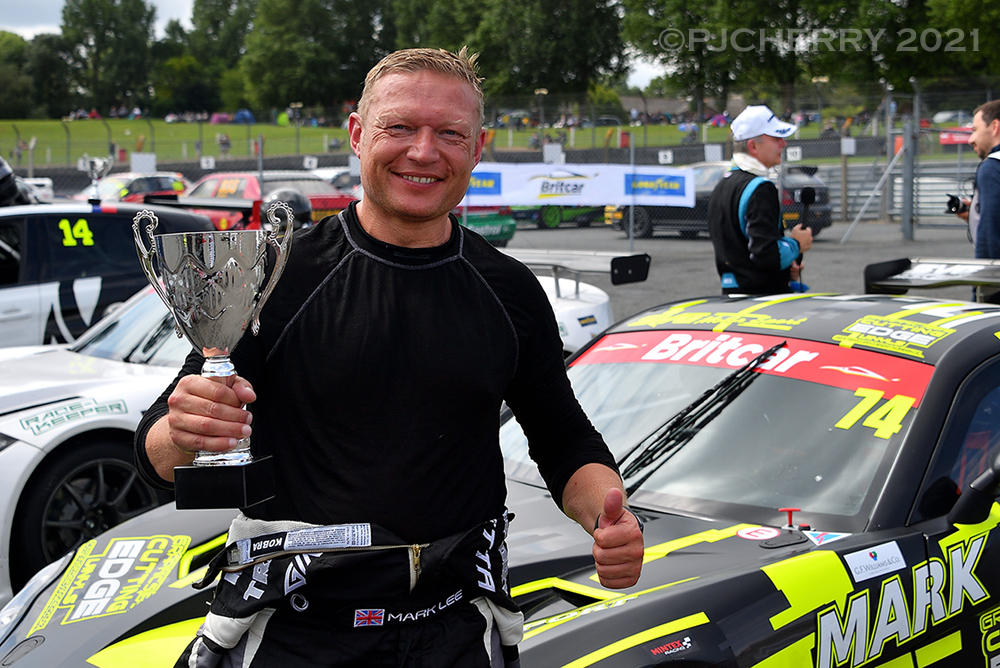 Yet another 2nd for Mark Lee and this Ginetta G56A

As the clock ticked down to the 50 minutes, Clarke’s BMW came up to lap third-placed Bryan Bransom’s E46. He passed, and set about putting a lap on second-placed Lee’s Ginetta, dragging an inspired Bransom along in his wake. Lee made his Ginetta very wide, and Clarke was now in the middle of a skirmish for the runner-up spot, and being the experienced and respectful driver that he is, let Bransom go, to challenge Lee for the position. Clarke kept up the pressure though, sticking to the tail of the grey E36, ensuring that Bransom never let up his challenge. Clarke took the flag, just 2 seconds over the allotted 50 minutes, but the squabbling pair just a few tenths ahead of him had another lap to sort out their differences. Lee maintained his position, though Bransom was just a quarter of a second shy, an epic performance from the Britcar newcomer which earned him the Britcar Driver of the Day award.

"I tried to get as bigger lead as I could, in case the car cut out as it did in Race 1, and I could restart it without losing the lead" said Clarke, adding, "there was no sense in getting a lap on those two, I was far enough ahead to let them get on with it".

The drama at the front rather clouded the fact that Terry Stephens had a solid run to fourth in the Peugeot 308, and Axel Van Nederveen recovered to sixth overall after his fraught race, while it was a midfield finish for the down-on-power MacG Racing Mazda RX8 of Jonny MacGregor and Josh Tomlinson, completing the Class 1 finishers.

Class 2 went to Richard Higgins, his usual impressive performance netting him another fifth overall, while it was a close finish for the runner-up spot, Peter Spano’s exclamation of "point o-five" after the race confirming that he held on to the place in his Ginetta G40 by just 0.054 seconds, fending off a sensational late race dash by Andy Mollison in the Clio started by Ryan Firth. Ricky Coomber and Mark Simmons had a better run this time, finishing fourth in the RKC Honda Civic, while Anthony Hutchins was a couple of laps adrift in his Boxster, and Alastair Lindsay did what he could in the heavily repaired SEAT, the Saxon team having done a great job of re-fettling to car to a raceable condition in the break. 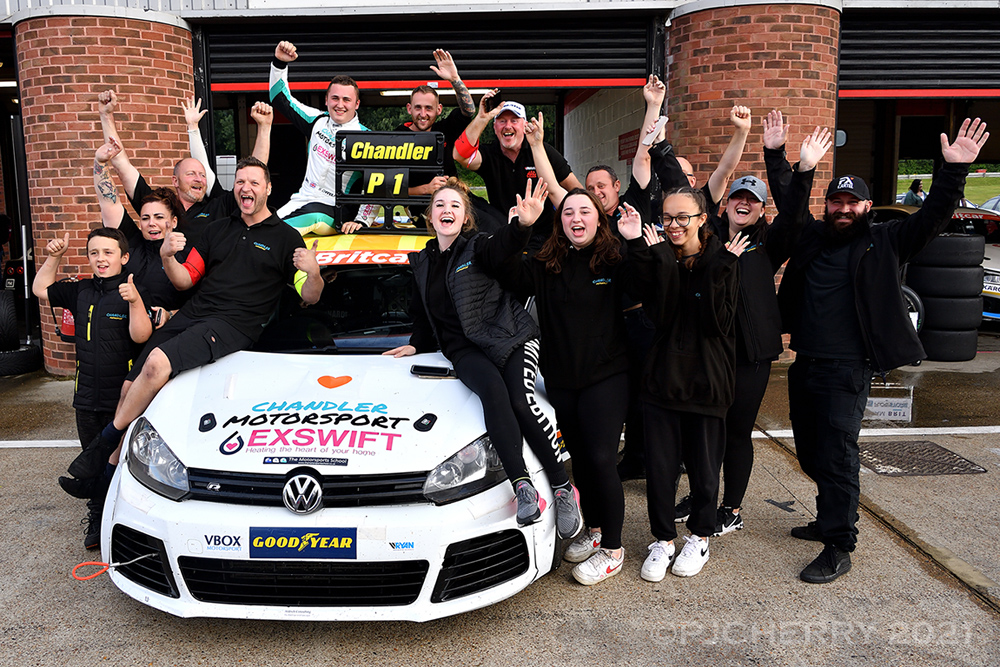 Chandler Motorsport were having a busy day, but built on the success of their Race 1 podium in Class 3 by taking the win this time, with Steven Chandler and Andy Wheatley jubilantly accepting their trophies, and it was a return to form for the Reflex pairing of Steve Griffiths and Jamie Vinall-Meyer, not quite back to their winning ways in the Ginetta G20, but second place salvaged their day. Robert Taylor, driving alone in the TSR VW Golf, completed the class podium, ahead of Charlotte Birch in the Vinna Sport Ginetta G40, Arthur McMahon’s Civic, and the second Reflex G20 of Stuart Gibbons and the very busy Jamie Vinall-Meyer. It was a day of mixed fortunes for Barry McMahon and Paul Plant – class winners in Race 1 in the Alfa Giulietta, Plant lost out to stablemates Steve and Edward Cook’s Civic, after Steve Cook’s last lap assault saw the gap just 0.330 across the line at the flag. In the Invitation class, James Chase had another cautious run in the Paul Sheard-run Mazda MX5.

After an early exit in Race 1, it was redemption for James Colburn and Tony Davies in the Clio class, taking the win nearly 10 seconds ahead of Anton Spires/Darren Geerearts, with Steve and Aaron Thompson a disappointed third this time – "It’s the pit stops" rued Aaron, shaking his head. Steve O’Brien and Matt Cherrington were fourth in the Motus One Clio, while, exemplifying the competitiveness of the class, Race 1 winner James Black was fifth this time.