Trophy Round 2 Race 2: Successful Weekend for Bransom and Sapra 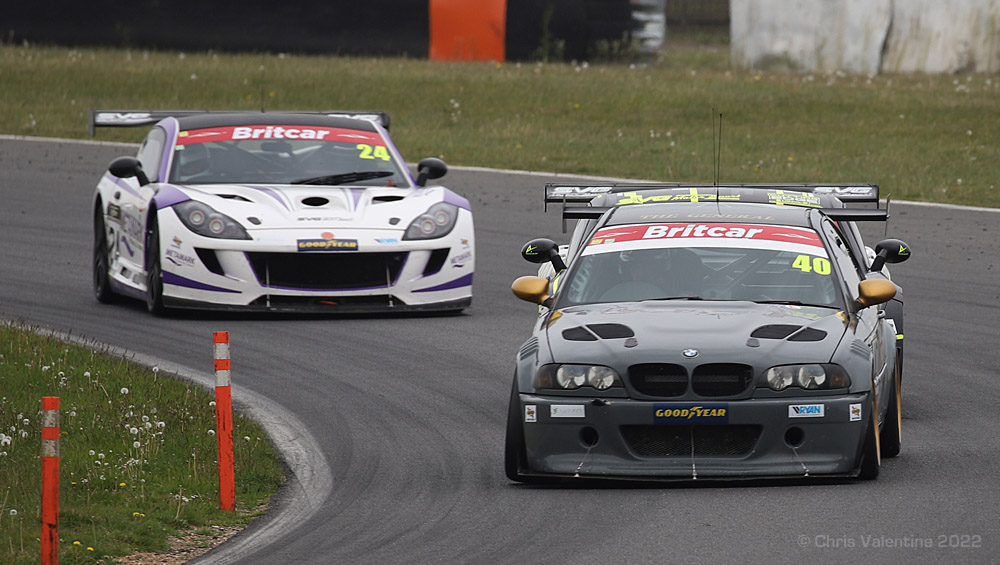 They won Race 1 of the Trophy Championship, and throughout the weekend they had graced the podium in other championships, so a win in Race 2 sealed a successful weekend for Jas Sapra and Brian Bransom.

Sapra’s BMW led away from the rolling start, pursued by the Ginettas of Owen Hizzey, Ian Astley and Axel van Nederveen. Hizzey was looking impatient, and on lap two got a run through Coram and made a lunge down the inside at Murrays, straightlining across the front of the BMW and onto the grass on the outside of the corner.  Astley seized the opportunity and took the lead, while Hizzey came out of the confusion quicker than Sapra, and across the line it was Hizzey and van Nederveen side by side. Sapra was having none of it though, and muscled the BMW through the middle of the two Ginettas, to take second place back by the time the trio got to Riches. Behind the leading pack, Josh Tomlinson in the MacG Mazda RX8 held station, and fast-starter James Alford had a pack of marauding teenagers behind his Golf, the Clios of Jack Meakin and Charlie Hand sandwiching Rhys Hurd’s Golf. The BMW of Charlie Hollings had dropped back, and Nigel Greensall was cutting through from the back in David Gooding’s BMW E36. Alford dropped back, with damage, possibly victim of assault from a teenage gang, and coming through faster than most from atypical start positions were the BMWs of Jagleet Virdee and  Team BRIT’s  James Whitley, who headed Charlie Hand, now the leader of the Clio group.

But not for long though, as the pit-stop window for the Clios loomed, they got racy again, Meakin taking the class lead back off of Hand, and Richard Ashmole joining the fray, all three of them now coming to terms with Team BRIT newcomer Whitley’s BMW, and just ahead of this group, Van Nederveen had no answer to the charging Virdee, who took fourth place.

Sapra, having taken the lead back from Astley, was the first of the heavy-hitters to take the mandatory stop, handing over to Bria Bransom, but there was significant action on the track too – Owen Hizzey went off big-time at Riches, almost ending up in the Norfolk farmland, and Jagleet Virdee’s BMW had a major engine blow-up; two serious contenders now out of the race. 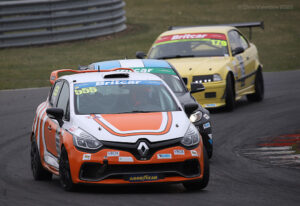 Once the field settled after the stops, Neil Wallace retained the lead in the Ginetta started by Astley, but Van Nederveen, who had no pit-stop success penalty, and Bransom were catching fast. The Belgian had one lap as leader before Bransom took the place and held it to the flag, finishing nearly 14 seconds to the good, with Wallace just four seconds further back in third. In fourth place, David Gooding capitalized on Nigel Greensall’s storming first stint in the Geoff Steel-run  BMW E36, but the MacG Mazda RX8 of MacGregor/Tomlinson joined the other Class 1 retirees with suspected diff failure.

The Clios and Class 3 cars came into their own as drizzle blighted the late stages of the race. Harry Yardley-Rose took the Chandler Golf over from Hurd and won Class 3, an amazing fifth overall, followed by Alford’s Saxon-run Golf and arch-nemesis Anthony Rodgers, who partnered Rob Taylor  in the TSR Golf, these three sandwiching the Clio podium finishers Charlie Hand (sixth overall), Scott Symon, and Richard Ashmole. Fourth and fifth in Class 3 were the BMW Z4s of Chris Murphy, who was just a whisker off the podium at the flag, and Callum Bates,  while in the Clios, the early-leading Black/Meakin car fell behind stablemates Giles and Jon Billingsley, finishing ahead of Geerearts and O’Brien’s  Motus One example. 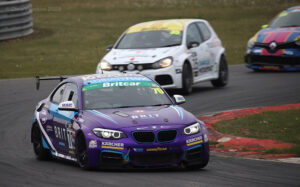 The Class 2 runner finished down the order – Chris Overend took the BRIT BMW over from James Whitley and did a sterling job to claim the win in the damp conditions, a performance which earned him the Driver of the Day award, with the Dodge/Hollings BMW and Paul Goodlad in the JW Bird Scirocco completing the podium.

The G40s appeared to struggle as the track dampened in the drizzle – earlier skirmishes descending into multiple spins and offs as the conditions worsened. Peter Dillnot came through as the winner again, ahead of Julian Daniel and Tony Whitney/Jez Sussex, who finished ahead of Wood/Moore this time, with Rob Morgan and Andy Ball completing the finishers.