Trophy Round 4 Race 1 Report: Life of Bryan, and All That Jas

Bryan Bransom and Jasver Sapra, in the Simon Green Motorsport BMW E46, took a hard-fought win in Race 1,fending off the Ginetta G56A of Mark Lee and Owen Hizzey.

There was a failure for Nigel Greensall’s BMW E36 on the way to the grid, and it was pushed into the infeld service roads and back to the pits for the Geoff Steel team to fix an electrical problem, and the race never properly got going once the pace car pulled off – Tony Rodgers’ #7 VW Golf had stopped on the circuit during the pace lap with drive shaft failure, and there was a sort-of aborted start; the pace car came in, the clock started ticking, but front-row sitters Sapra and Lee Frost sensibly kept the field in check under yellow flag conditions until the obstructing Golf was removed. 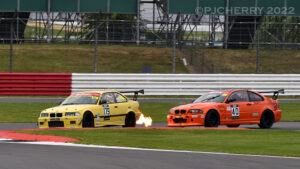 Nigel Greensall’s BMW entertained with flames on the overrun

And it was Frost’s BMW E46 that took the lead once the field was let go, with Sapra and Hizzey in tow, and at times, almost alongside, with Axel Van Nederveen’s G56 eager to join in too, but Frost’s lead, and his race, was short-lived; just two laps in, the white E46 was pitbound and into retirement with drivetrain concerns. Nigel Greensall had now got going in the yellow BMW E36, and assisted by the aborted start, was on the lead lap and assertively cutting through the hatchbacks, leaving a blast of flame from the over-run as a thank-you. When the leaders got to lapping the G40 runners, seven laps in, Van Nederveen seized the opportunity and relieved Hizzey of second place. With the pit window open, Neil Wallace was the first in, handing the #24 SVG Ginetta G56 to Ian Astley,   and next time around, Sapra and Hizzey pitted simultaneously, leaving Van Nederveen to head the field  for a few laps before he pitted too. The SVG team made a slightly better use of the two-minute pit-stop duration, and Mark Lee took the Ginetta out ahead of Bryan Bransom, who was now in the erstwhile leading BMW E46. The gap was two seconds on their out-lap, a mere whisker next time round, and then the orange BMW was just ahead. The gap fluctuated in traffic, and Lee mounted a last-gasp assault which saw Bransom take the flag just 0.654 ahead of the Ginetta after 45 minutes of racing. Axel van Nederveen maintained his third position, nearly a quarter of a minute adrift, and Ian Astley, in his first full season of racing for around 20 years, brought Neil Wallace’s G56 home fourth, while Dave Gooding consolidated Greensall’s earlier recovery drive in the flame-spitting BMW E36 to finish fifth, and the last on the lead lap was the MacG Racing Mazda RX8, with Josh Tomlinson getting to grips with the handling immediately after taking over from Jonny MacGregor, and there was a midfield finish for the BMW E46 of father and son duo William and Freddie Lynch.

In Class 2, Team BRIT lost the lead during their pit stop – a kill-switch malfunction delayed them by about two minutes. Chris Overend had punched in his fastest lap immediately before pitting, and James Whitley maintained a similar pace during his closing stint, so it was a surprise win for newcomers John Mawdsley and Stuart Mead, in the Saxon-run VW Scirocco, a great result for them after a dismal time in another series, while Paul Goodlad continued his programme of constant improvement – faster lap times once again – and was third in the JW Bird-run Scirocco, ahead of the Golf of veteran Dave Beecroft and youngster Harry Rice. 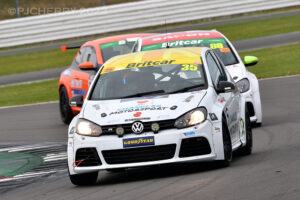 The Chandler Motorsport Golf was dominant in Class 3 – Rhys Hurd capitalised on Harry Yardley-Rose’s opening stint, and the teenagers were convincing class winners. Rob Taylor’s second place in TSR Golf was taken by James Alford’s newer model early on, but post-race penalties for a couple of infringements dropped Alford back to third, allowing Mark Jones, who had taken over from Taylor, to claim the runner-up spot, while the Invitation entry Golf of Shaun Andrews and Clive Goldthorpe was fourth.

The Clios, as usual, mixed it with the Class 3 Golfs for track position, and all the way through, Scott Symons was in touch with the Chandler Golf, eventually finishing ahead of it, and more importantly, ahead of Charlie Hand, who was in font of Joe and James Harrison, having their best result yet, though possibly down to Richard Ashmole receiving a post-race penalty. Rhys Lloyd and Matthew Dawson, newcomers to the class, were fifth, ahead of Ed McDermott/Ben Williams, with James Black/Jack Meakin and Darren Geerearts/Steve O’Brien atypically down the order, while the men in serious trousers slapped a biggie on Jon Billingsley for pitting out of sequence. 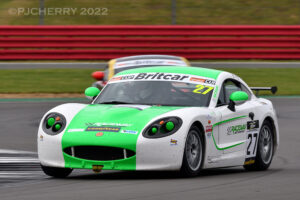 There was a surprise result in the G40 Cup; regular front-runner Peter Dilnot had to change cars due to an issue with his regular machine, and took in a spin on his way to third, so a debut win was taken by Brendan Haffner, with Julian Daniel runner-up. Newcomers Mark Warren / Andrew Waterfall finished fourth, ahead of Alex Turnbull/Graham Bishop,  and there was the usual doubling-up of drives after qualifying woes -Stephen Moore jumped in with Andy Ball, Rob Morgan shared with John Wood, and Tony Whitney drove alone; they all completed the race.