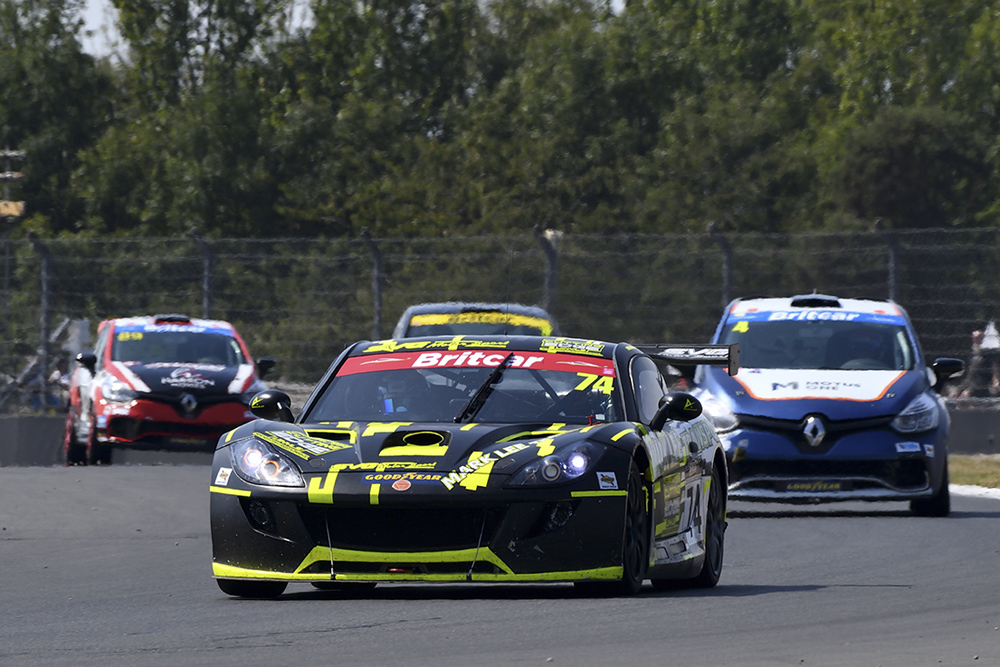 The SVG Motorsport Ginettas of Mark Lee/Owen Hizzey and Neil Wallace/Ian Astley finished barely a second apart in a race that saw a great deal of damage limitation to get to the end of the heat-affected 50 minute race.

Only Kevin Clarke could break the stronghold of the Invitation-boosted Ginetta marque at the sharp end of the grid, but his front row slot was empty as the field formed up, the BMW E36 having come of worse in a  clash with a Ginetta G40 in qualifying, causing Clarke to embark on a mercy dash to Worcester for spare parts to effect a repair. 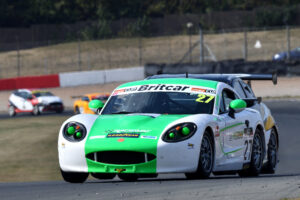 Hizzey led Astley away at the rolling start, the two SVG machines quickly asserting authority and building a gap back to Axel van Nederveen, who was holding off Datum stablemates Maurizio Sciglio and Marco Anastasi, while Jonny MacGregor’s breaking of the Ginetta stronghold in the Mazda RX8 was short-lived, as Dave May, getting to grips with his newly -acquired G55A, and Sebastian Debois’ G56A got past.  Upholding honours for BMW at this point were James Whitley in the Team BRIT 240i, and Wiliam Lynch’s E36, but coming through fast  from the back was Bryan Bransom, the orange E46 having missed qualifying due to clutch failure. Harry Yardley-Rose was the early-race Class 3 leader in the Chandler Golf, ahead of Rob Taylor in the similar TSR machine, while Rhys Lloyd headed the Clios, leading Jack Meakin and Charlie Hand, and a quick spin for Marc Warren’s Ginetta G40 handed the class lead to Brendan Haffner. Some close racing saw Dave May take a trip through the gravel while dicing with Sciglio, and contact between Joe Harrison’s Clio and Fynn Jones’ Golf saw the Golf beached and the Clio pitbound, though, seemingly a little early, the pit window was declared open anyway, and having cleared the Clio trio squabbling for their class lead , Hiizzey brought the leading G56A in for Mark Lee to take over. There were numerous reports of heat issues affecting performance, mainly brake-related, though the MacG Mazda was reportedly around 50 hp down on power too.  Not rejoining from the pit stops was van Nederveen’s G56A (overheating gearbox compressor), and not going much further were Chris Overend’s Team BRIT BMW 240i (starter motor), Paul Goodlad’s Scirocco (gearbox)) and Jas Sapra, who pitted the E46 started by Bransom with a misfire. Alex Turnbull spun his G40 into the gravel, and it was race over for him as well.

Charlie Hand had got the jump on the Clio group by pitting late into the window, but was being pursued by Richard Ashmole, ahead of Matthew Dawson and James Black, while at the head of the field, Neil Wallace now led lone-driver Sciglio, but Mark Lee was taking great chunks out of their advantage, and when Sciglio made an unscheduled pit stop, just 10 seconds separared Lee from leader Wallace, who was done no favours when trying to put a lap on Mark Skeats, now in the Jamsport Ginetta. Lee took Wallace with seven and a half minutes left, and pulled out a comfortable lead, which he tactically squandered on the very last lap – anxious not to cross the lne with seconds to spare, he maintained a pace that saw him breach the 50-minute deadline by two seconds, just 0.970 ahead of team-mate Wallace. Sebastian Debois had quietly got on with the job in the Motus One Ginetta G56A, just nine seconds adrift in third, with Maurizio Sciglio was a lap down in fourth after his late pit stop, and after that it was a tale of limitation and some late retirements for the remainder of the Class 1 runners; Marco Anastasi was three laps down in his G56A, while not going the distance by a short measure were the BMW E46 of William and Freddie Lynch, the MacG Mazda, which Josh Tomlinson brought in with an overheated shift pump, and the May/Skeats G55A, with fuel pressure issues. 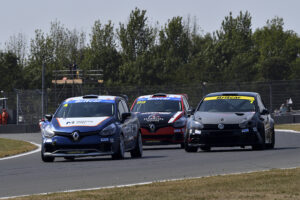 Class 2 saw real attrition – Arthur McMahon, despite picking up a track-limits penalty, and a slow out-lap from his mandatory stop, claimed the class win, three laps ahead of the Invitation entry GT5-spec Ginetta G40 of father and son duo Edward and Oliver Cottam, the only other Class 2 car to take the flag, though there was real excitement in the Clio class; Charlie Hand, comfortable sitting behind the Class 3 Chandler Golf,, had Richard Ashmole closing up on him in the final laps. Both took the Golf, and Ashmole took the lead, but championship leader Hand was having none of it- they came up to the chicane for the final time, going either side of Andy Ball’s G40, and Hand got the better run up to the line, finishing just 0.300 ahead of Ashmole, though there were yellow flags waving at that point, and the officials were rather generous in applying just a one-second penalty to Hand, to give Ashmole the win. Erstwhile front runners Black/Meakin and Lloyd/Dawson were a lap down on the class leaders at the flag, with Scott Symons atypically down in fifth, ahead of Steve O’Brien/Darren Geeraerts, newcomer Gary Mitchell, and the High Row car of James and Joe Harrison, all Clios creditably going the full distance.

Despite a five-second penalty for tack limits, the Chandler Golf of Rhys Hurd and Harry Yardley-Rose was dominant in Class 3, with lone-driver William Puttergill impressive on his Britcar debut in his invitation-entry Honda Civic, finishing second ahead of the TSR Golf of Rob Taylor and Mark Jones, which bagged the points to keep their title hopes alive. Steve and Ted Cook were welcome returnees, fourth in the Mauger Motorsport Civic, ahead of the Invitation-Fiesta of John Cooper / Oliver Hunt, and the Team BRIT BMW 118 of Tee Mathurin and Paul Fullick, back after a lay-of awaiting parts for the car. Sadly not making the flag was the smart Golf of Shaun Andrews and Clive Goldthorpe, which lunched it’s second engine of the weekend six minutes from the end.

Brendan Haffner drove an exemplary race in his white and green G40 to secure the class win, just over 20 seconds ahead of Peter Dilnot, and Marc Warren/Mark Andrews recovered from that early spin to take third, with Andy Ball fourth, while late-race spins saw Julian Daniel and Alex Turnbull finish their race in the gravel.